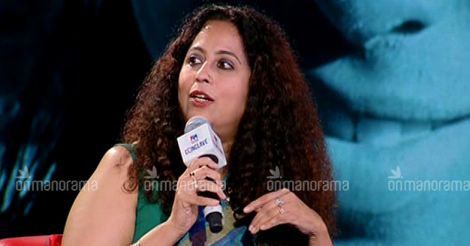 “Writing is an amalgamation of life and dreams. Social media do not capture its spirit to the fullest” she said at a discussion on 'Gender of Happiness' organized as part of Manorama News conclave 2017.

"Social media provide immense exposure even to the simplest of your writings. Many consider that a serious form of literature. But writings on social media fail to constitute the very primary elements of literature," Nair told Onmanorama.

“Writing is a process where the numerous aspects of life come together and revolve around your thoughts. It is as vast as your life and dreams. You can't confine it to the 140 characters on Twitter. You can't judge your talent from the number of likes or comments," said Anita Nair. Elaborating on her idea of happiness, she said that life is one phenomenon that has always inspired her to write.

Also read: 'Women need to equip themselves to address depression'

"I wonder at the versatility in people, experiences and phases life brings in. I have always admired nature like a child and wondered at the phenomenon of life," she said.

She said the society expects a very high degree of politeness and modesty from women.

It has a preset structure of norms which defines the extend to which women could express their happiness and these set of norms doesn't go hand in hand with happiness, Anita Nair added.

Commenting on her own happiness, Anita Nair said that the happiest moment of her life was when she scribbled down a piece of literature for the first time and discovered the kind of writer in her.

"I felt extremely happy when I wrote the first two paragraphs of my very first work in a very tender age. I read it once again and discovered the kind of writer I am. I realized that there is a strong writer in me. I have never ever got the same wonderful feeling again," she revealed.