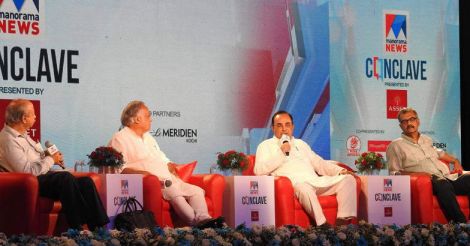 Kochi: The measured attack and counter attack started early on with former union environment minister Jairam Ramesh firing the first salvo with the word Schadenfreude - meaning 'your happiness at the cost of other's misery.'

He ascribed happiness to a sense of care, compassion, tolerance and acceptance. Keeping away from imposing is the best thing that a government can do, he told discussion on 'Manifesto for Happiness' organized as part of Manorama News Conclave here on Saturday.

Not one to be blighted by such salvos, BJP leader Subramanian Swamy said the Constitution guaranteed reasonable restrictions on the rights of citizens.

Justifying the restrictions on animal slaughter and triple talaq, Swamy said the nation needed to be in the ambit of law to see that the hard-line elements are at bay.

CPM leader Nilotpal Basu, in jocular vein, said any discussion was bound to deviate from the agenda if Congress and BJP leaders spar.

Also read: Happinomics and a not so rosy take on how entrepreneurial ambitions are choked

He drew allusions from Tagore's verses to drive home the importance of unity in diversity.

As a senior journalist drew the panelists into the culinary and dietary apprehensions of the common man, the discussion became spicy and juicy with a copious amount of beef.

Nilotpal stuck to the socialist refrain and said happiness was being consciously being diverted to the affluent classes of society.

Swamy tried a hair-splitting analysis of the restrictions on cattle slaughter and wound up his argument with his initial point of “reasonable restrictions.”

Nilotpal Basu said happiness could be increased when the people think that those in power were sensitive to their needs.

The moments of hilarity were accentuated by frequent and good-humoured tiffs between Swamy and Jairam Ramesh.

But, they agreed happily on the point that Nilotpal Basu should not address the former as Swamiji as there was no dearth of Swamis in India.