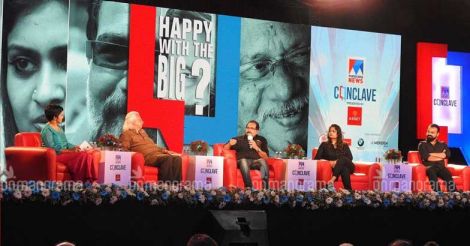 Kochi: Noted filmmaker Adoor Gopalakrishnan on Saturday gave vent to his opposition to big budget moves saying he would have made thousand films with a Rs 1,000 crore budget.

Speaking at a panel discussion, Cinema: Happy with the Big? organized as part of MM News Conclave, he said: "I have a problem with the addiction for big budget movies. Thousand crores - the figure itself scares me. I would have taken a thousand films with that."

The internationally acclaimed filmmaker said movies like Baahubali could spoil the healthy cinema culture of the state.

"I believe in spending the right budget. A low budget makes you compromise and a high budget is a waste of money. I go by an amount which actually serves the purpose," he said.

Adoor expressed concern at the way the society is being easily geeting carried away by promotions and propaganda.

"Public are given no choice at all when a single movie is released in a hundred theaters in a single state. I am also concerned about the standard of national awards committee because this movie won last year's national film awards,” he said.

Also read: Why there is no consensus in drafting a Manifesto for Happiness

What is this other than a digital imitation of those old Tamil spiritual movies? he wondered.

Actor-filmmaker Geethu Mohandas, who was also a participant of the discussion agreed to this point, saying that it is mere ignorance to think that a massive budget enables you to inculcate better VFX.

"Baahubali is not a bad movie indeed. Such movies have specific market in this country. But please don't call it an international movie. This is not how the international movies look like. Indian cinema has evolved out in such a way that those who make noise are the only ones who get noticed," she said.

Responding to the comments on Baahubali, Sabu Cyril said that he could deliver true art work in whatever budget as art direction is his profession and cinema a passion.

"I personally like the kind of movies Adoor Gopalakrishnan makes. But that is my preference and interest. Art direction is my profession. I have worked in low-budget cinema sets. I have crafted props from used bisleri bottles and have worked for no money at all. But if you fund me, I'll deliver that high level of work. There I draw a clear line between profession and passion," Cyril said.

Hailing from a family with a rich tradition of filmmaking, Kunchacko Boban said that Keralites are basically nostalgic in nature.

"Films like Baahubali and Pulimurugan are need of the time. But they happen only once in a while. Big budget movies come and go, which is a necessity too. But realistic movies which discuss nature, life and emotions are here to stay,” he said.

“I have experienced both good and bad sides of Malayalam movies. We have got a very easily adaptable audience. Our audience prefer movies of quality content and I am sure such movies will keep happening in Kerala," he added.