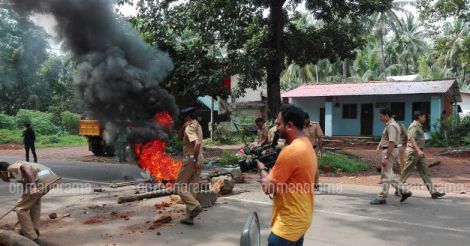 The agitators blocked the road by setting tyres and logs on fire. Photo: Manorama

Mukkam: Violence and arson were reported for the second day Thursday from Mukkam along the Kozhikode-Malappuram route, where people have been protesting against the proposed liquefied natural gas (LNG) pipeline of Gas Authority of India Ltd (GAIL).

The agitators blocked the road by setting tyres and logs on fire. When the police intervened to restore traffic, stones were hurled at them, forcing them to resort to lathicharge. Several people were injured in the police action.

Police have taken several people into custody over the violent incidents. However, people alleged that the cops had barged into houses and detained several persons.

Meanwhile, the police are also checking if any extremist elements tried to create trouble in the area.

Police have intensified their probe against certain outfits in Malappuram. Cops said protesters turned up at the protest site, armed with sticks and stones.

"Government should resolve the issue of people, who have been forced out of their homes," he added.