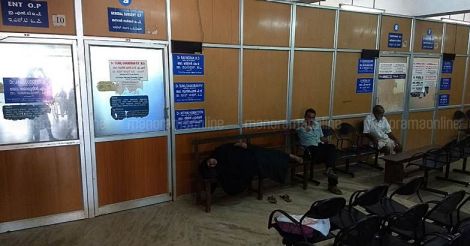 The Kerala Government Medical Officers Association had called for the agitation late Thursday night to protest against the decision to extend the OP time in hospitals from 9 am to 6 pm.

Thiruvananthapuram: Government doctors in Kerala have been on an indefinite strike since Friday morning, putting patients in trouble with most of them clueless about the stir.

The Kerala Government Medical Officers Association (KGMOA) had called for the agitation late Thursday night to protest against the decision to extend the OP time in hospitals from 9 am to 6 pm. Earlier, the timing for the same was up to noon. The protest was also triggered by the suspension of a doctor, Jismi, at Kumaramputhoor family health centre (FHC) in Palakkad.

The doctor had to face the action on Thursday after she refused to turn up for the evening OP duty under the Aardram Mission.

Patients at the receiving end

Patients visiting the hospitals since early on Friday were clueless about the stir.

A woman,who had come to the government general hospital here at 5 am, expressed anger and said the stir would cause hardship to the poor patients, as they cannot afford to go to private hospitals.

"Only after coming here, I came to know that doctors are on strike," she said.

Patients have been waiting in a queue since 4 am, she added.

A statement from the KGMOA said only the casualty wing would function during the strike and in-patient treatment would be provided only till April 18. The doctors in medical college hospitals are not takng part in the stir.

There would not be any new admission, it said, adding that only emergency operations would be performed.

The association said temporary doctors also want to be made permanent.

In a Facebook post, health minister K K Shylaja said the agitation was to defeat the government's 'Ardram Mission' which envisages basic facilities to all hospitals in the state and making government hospitals patient-friendly.

Dismissing the agitating doctors' claims, the minister said three doctors have been appointed to each hospital where outpatient hours were increased.