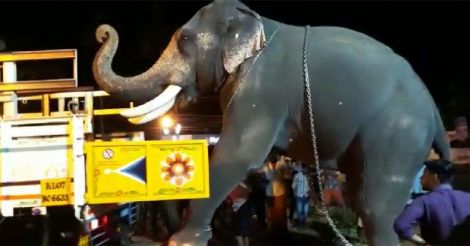 Chirakkal Kalidasan, a celebrity elephant from Thrissur, refusing to get into the truck after being distracted by the laser pointer. Photo: Screengrab

Thrissur: There has been a spurt in the number of captive elephants running amok during temple festivals in Kerala of late. Severe torture and unscientific handling are often cited as key reasons for jumbos going on the rampage while being paraded for ceremonies.

However, lending a new twist to the debate, the Elephant Owners' Association and a section of elephant lovers in Kerala alleged that the recent incidents were handiwork of a mysterious group with vested interests. Based on their complaint, the Special Branch of the Kerala police has launched a probe to unearth the truth in the alleged use of laser pointers to provoke jumbos during temple festivals.

Yet, there is no scientific explanation as to why elephants turn restive when laser beam is shone into their eyes.

There were complaints that light beams were shined continuously from a distance into the eyes of elephants paraded at the Sree Padmanabhaswamy Temple in Thiruvananthapuram and some other local temples in Thiruvalla and Pathanamthitta. It was alleged that the jumbos turned restive and violent after being blinded with the high-powered laser pointer.

To corroborate the claim, a video clip purportedly showing flashing of a beam of light into Chirakkal Kalidasan, a celebrity elephant from Thrissur, while the animal being loaded onto a truck, was submitted to the investigation team by the Elephant Owners' Association. In the footage, the hapless pachyderm could be seen refusing to get into the truck after being distracted by the laser pointer.

According to his mahout, Kalidasan, who shares a close bond with him, has always been gentle and obedient. He had never refused to obey commands, but that day he was visibly annoyed by the light beam, the mahout said. The incident took place at Mayyanad in Kollam.

Similar videos have emerged from different parts of the state, said office-bearers of the Elephant Owners' Association.

Photographs of another incident, in which local people are seen questioning a foreigner, who was suspected of shining light beams into the eyes of a jumbo, are also being widely shared on social networking sites with the description ‘beware of this person’.

Suspecting that the beam could be that of the focus assist light of DSLR cameras, elephant owners had discussed the matter with photographers, but they confirmed that no cameras currently available in the market produce such narrow, parallel beam of light.

The Elephant Owners' Association is also trying to identify the person who was spotted holding a stick and chasing the elephant which went on a rampage in Sabarimala recently. It is said that he was not a part of the team which took care of the elephant.

Earlier, it was believed that he was assigned to remove tree stumps and clear the path for the jumbo, but later witnesses confirmed that he had poked the animal with the stick before it became aggressive.

The Elephant Owners' Association has demanded a probe into the alleged incident.

As the hearing on the case pertaining to parading of elephants at temple ceremonies is scheduled for June in the Supreme Court, the state body’s office-bearers and elephant lovers suspect that there is a wicked attempt to create an impression that incidents of elephants running amok are on the rise in Kerala.