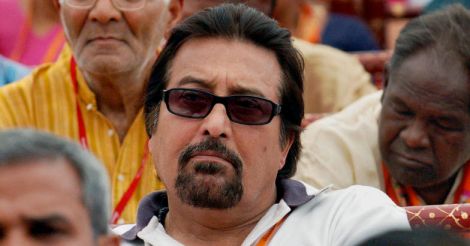 Mumbai: Veteran actor and member of parliament Vinod Khanna the dashing Bollywood star best known for his roles in films such as "Amar Akbar Anthony", "Qurbaani" and "Insaaf" -- died of cancer at a hospital here this morning. He was 70.

"He passed away at 11.20 AM. It's a sad moment for us... We request you all (media) for privacy," the actor's brother Pramod Khanna told PTI.

Khanna was admitted to the Sir HN Reliance Foundation Hospital on March 31 with complications arising out of severe dehydration.

An official statement from the hospital said Khanna was suffering from bladder cancer.

A leaked photo from the hospital earlier this month first raised concerns about Khanna's health but his family declined to comment at that time.

The actor is survived by his wife, Kavita Khanna, and four children - Rahul, Akshaye, Sakshi, and Shraddha.

Rahul and Akshaye, both actors, were from his first wife, Geetanjali.

Khanna was cremated in Mumbai Thursday evening in the presence of family and friends from the industry including Amitabh Bachchan, son Abhishek, Akshay Kumar, Rishi Kapoor, Randhir Kapoor, Gulzar and Danny Denzongpa.

Feted as one of the most handsome actors of the Hindi film industry, Khanna made his acting debut in 1968 with "Man Ka Meet". In many of the earlier films, Khanna played a negative or a supporting role.

His potential was first noticed in Gulzar's "Mere Apne" in 1971.

Khanna's memorable films as a solo lead were in Gulzar's "Achanak", which was inspired by the KM Nanavati case, "Imtihaan" and "Lekin", a reincarnation drama, also directed by Gulzar.

He and Bachchan were a popular pair, and acted in several films such as "Amar Akbar Anthony", "Parvarish", "Here Pheri" and "Muqaddar Ka Sikandar".

At the height of his popularity, Khanna surprised his fans when he took a break from acting for five years from 1982 by joining Osho Rajneesh in Oregan in the US.

He returned to cinema in the late eighties, and courted success again with films such as "Insaaf", "Satyameva Jayate" and "Dayavan".

He was seen in the Shah Rukh Khan-starrer "Dilwale" in 2015. He was last seen on-screen in Hema Malini-starrer "Ek Thi Rani Aisi Bhi", which released on April 21.

Khanna was also an active politician, and a Member of Parliament from Gurdaspur, Punjab. The sitting BJP MP had won the seat four times.

"Vinod Khanna was a greatly admired personality. It's a personal and emotional loss for me as we have been very close and journeyed together in films as well as in politics," Sinha, who worked with Khanna in hits like "Mere Apne", "Bombay 405" and "Do Yaar", told PTI.

Celebrities, young and old, remembered Khanna as one of the most charismatic personalities of the Hindi film world.

"Vinod Khanna ji, one of the best talents in the film industry, is no more. I am deeply saddened by the news. His demise is a big loss to the film industry. May his soul rest in peace," melody queen Lata Mangeshkar tweeted.

Veteran singer Asha Bhosle remembered him as "a decent man and a star till the very end."

Rishi Kapoor, who played Khanna's younger brother in "Amar Akbar Anthony" and worked with him in another memorable hit "Chandni", tweeted, "Will miss you Amar. RIP. Remembering the good times with you, Vinod. Thank you for being my friend."

Superstar Rajinikanth said, "My dear friend Vinod Khanna... Will miss you, RIP. My heartfelt condolences to the family."

Filmmaker Karan Johar said, "His screen presence is unparallelled even today... his super star swag is what we grew up on....RIP Vinod Khanna ...thoughts and prayers."

Actor Akshay Kumar said Khanna's passing was the end of an era.

"Sad to learn about the passing away of Vinod Khanna Sir, one of the most charismatic actors...truly end of an era."