Mukherjee said he was happy that the 64th edition of the awards represented a "microcosm" of India and celebrates the diversity of languages, customs, religions and culture.

"Indian cinema and its diversity conveys the underlying spirit of brotherhood, tolerance, acceptance and co-existence. The inherent strength of unity in spite of diversity was our cultural heritage which was inherited through ages," Mukherjee said during the ceremony.

Viswanath became the 48th recipient of the Dadasaheb Phalke award, the highest recognition in Indian cinema, which consists of a golden lotus, a citation, cash prize of Rs 10 lakh and a shawl. 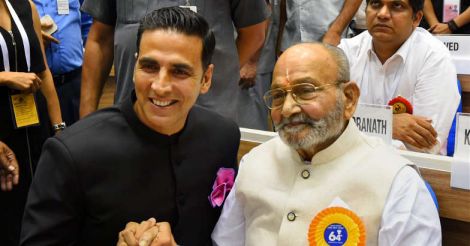 "It is an auspicious occasion to receive this prestigious award. I offer my 'pranams' to my parents and to the Almighty who is everywhere. Thank you to his excellency, the president, honorable ministers and jury members and to all my fans everywhere in India," the 87-year-old filmmaker said.

Akshay was honored for his portrayal of a patriotic naval officer in Rustom, a court room drama directed by Tinu Suresh Desai, which is loosely based on the 1959 Nanavati murder case. He received the Rajat Kamal and Rs 50,000.

The actor was accompanied by his wife Twinkle Khanna and son Aarav Bhatia.

C.M. Surabhi was given the best actress award for her role in the Malayalam film Minnaminungu-The Firefly. She received the Rajat Kamal and Rs 50,000.

"I am very happy that I have won this award so early in my career. I am thankful to the jury and I am happy that regional cinema is being given its due," Surabhi told PTI after accepting her award. 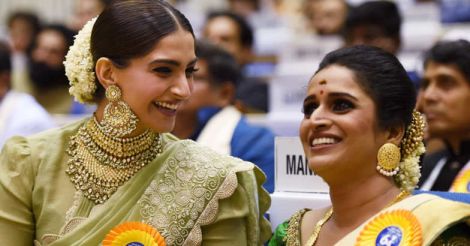 Surabhi with Sonam Kapoor at the 64th National Film Awards function at Vigyan Bhavan in New Delhi on Wednesday. PTI

Neerja, directed by Ram Madhvani, was awarded the best Hindi film. It is based on the 1986 hijacking incident during which flight attendant Neerja Bhanot was killed by terrorists while saving passengers.

Neerja star Sonam Kapoor received a special mention for her role in the film. The actress chose to go traditional for the ceremony wearing a pastel green saree. She was accompanied by father, actor Anil Kapoor, mother Sunita Kapoor and rumored beau, businessman Anand Ahuja.

The trio cheered the actress as she went up to the podium to accept the special mention. 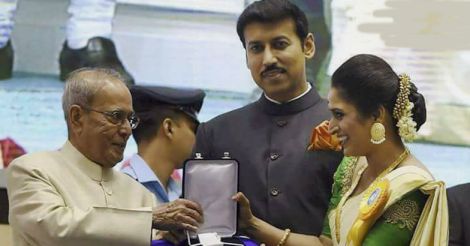 Bengali filmmaker Aniruddha Roy Chowdhury, who made his Hindi directorial debut with Pink, said after the success of this film he now wants to make more Hindi films. 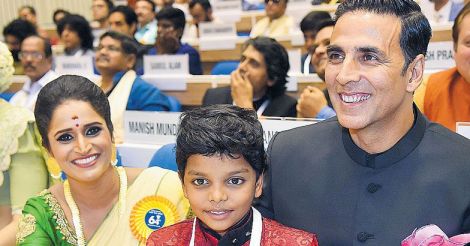 "It started with a good box office collection and now the national awards. We couldn't have asked for anything more. It gives a huge boost to get an award from the president. I am planning to do more Hindi films," Aniruddha told PTI.

Marathi movie Kasaav led the regional cinema dominance bagging the best feature film honor and was awarded the Swarna Kamal and Rs 2,50,000 each to the director and producer.

Kasaav, directed by Sunil Sukhtankar and Sumitra Bhave, revolves around the issue of depression and environment conservation.

"I am happy that Marathi films are getting national recognition. I hope that the audience and the jury keep appreciating the work coming from regional cinema," veteran actor Mohan Agashe, who has produced the film, said.

Kashmiri actress Zaira Wasim was given the best supporting actress award for her role in the Aamir Khan- starrer Dangal, while Nagesh Kukunoor's Dhanak was honored as the best children's film.

"It has been a marvelous journey with 'Dhanak'. We began the journey at Berlin Film Festival and it culminated with the national awards in Delhi. It is not a bad trip to take over the past three years," Kukunoor said.

Mapuskar took home the best director award for his film Ventilator and was given the Swarna Kamal and Rs 2,50,000. The movie, produced by actress Priyanka Chopra and her mother Madhu, won three awards. 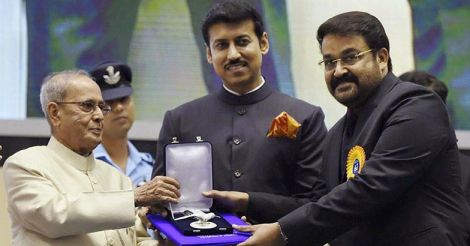 The best adapted screenplay went to Dashakriya, which was honored as the best Marathi film, while its star Manoj Joshi was given the best supporting actor award.

Actor Mohanlal received the special jury award for his notable work in films like Pulimurugan, Janatha Garage and Munthirivallikal Thalirkkumbol. 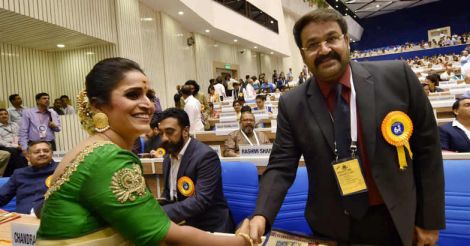 Both Sundharayyar and Iman performed their respective award-winning songs during the ceremony.

The Indira Gandhi Award for the best debut film of a director went to Bengali movie "Alifa" by Deep Choudhary.

Babu Padmanabha was honored with the best music direction award for Kannada film "Allama", while there was a tie in the best lyrics category -- Vairamuthu won for Entha Pakkam from the Tamil film "Dharma Durai" and Anupam Roy for "Tumi Jaake Bhalo Basho" from "Praktan". 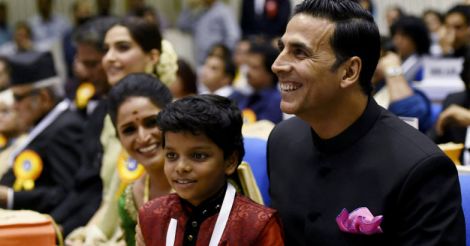