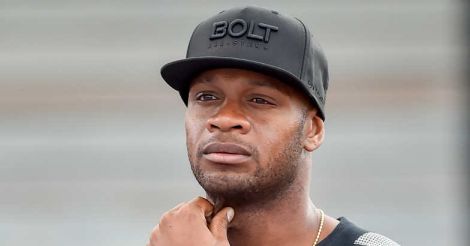 Asafa Powell was not among the 30 men named earlier this month to take part in the track and field at the April 4 to 15 Games. File photo: AFP

Kingston: Former 100 metres world record holder Asafa Powell was left out of the Jamaica team for next month's Commonwealth Games because of injury, the head of the country's athletics association said on Friday.

Powell, who won 100m gold at the last Commonwealth Games to be held in Australia in 2006, had expressed a desire to race on the Gold Coast despite heading towards retirement at the age of 35.

The Olympic sprint relay champion was not among the 30 men named earlier this month to take part in the track and field at the April 4 to 15 Games. However,  the island nation's top athletics official said the reason was straightforward.

"We had a credible report that Powell had sustained an injury and therefore could not be selected," Jamaica Athletics Administrative Association president Dr Warren Blake told Reuters.

Jamaicans have won the men's 100m at the last four Commonwealth Games as the nation enjoyed a golden age in men's sprinting spearheaded by the now retired Usain Bolt.

With 2014 Glasgow champion Kemar Bailey-Cole also failing to make the team for the Gold Coast, 2011 world champion Yohan Blake will be a strong favourite to continue that run.

Blake, Bolt's former training partner and the third fastest sprinter of all time, is already in Australia with teammate Julian Forte, who ran the third fastest 100m in the world last year behind American Christian Coleman and Blake.