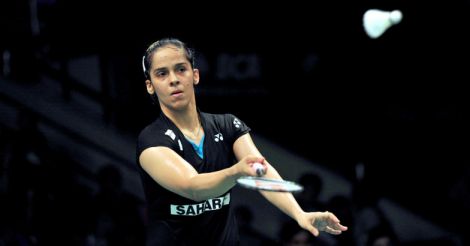 Saina had earlier written an email to the IOA threatening to pull out of the CWG if her demand for clearing her father's name was not met.

"If his accreditation is not cleared, I am not going to play the matches," Saina's email said.

Earlier on Monday, the London Olympics bronze medallist had lashed out in a series of tweets at the IOA after her father's name was deleted from the list of entrants to the Games Village.

"Surprised to see that when we started for CWG 2018 my father was confirmed as the team official and I paid the whole amount for that but when we came to the games village his name was cut from the team official category.. and he can't even stay with me," an irked Saina wrote in her first tweet.

"He can't come to my matches and he can't enter the village nor he can meet me in anyway...what kind of support is this..I wanted his support as I regularly take him for my competitions...but I didn't understand why nobody informed me all this earlier...that he can't enter anywhere," her second tweet read.

Fearing another controversy ahead of the Games, the IOA cleared Harvir Singh's Games Village accommodation which now means that he can watch Saina's matches.

Reacting to the decision, Saina thanked the IOA for sorting out the issue in a tweet: "Thank u so much @ioaindia for the support and help sorting out my father's accreditation card in such short notice ..Hopefully it will b great for the matches ahead ..and I m sorry for all the trouble."