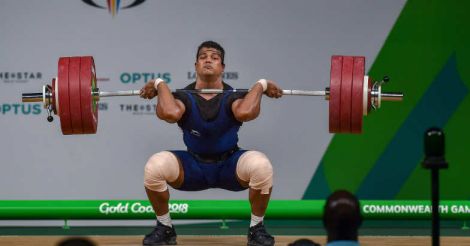 Gold Coast: Venkat Rahul Ragala became the fourth Indian weightlifter to claim a gold medal at the ongoing Commonwealth Games, coming out trumps in a tense contest here on Saturday.

The 21-year-old Rahul, who is a Commonwealth Championships gold-medallist, lifted a total of 338kg (151kg+187kg) to finish on top.

Both the lifters opted for 191kg as their final clean and jerk lift and both of them failed but Rahul clinched the top prize owing to Opeloge's failed second attempt at a 188kg lift.

Had Opologe managed a good final lift, Rahul would have ended with a silver as he had already fouled his third attempt.

In the Commonwealth Championships last year, Rahul had lifted a total of 351kg (156kg+195kg).

India have so far won four gold medals and a silver and bronze each – all in weightlifting – at the Games.