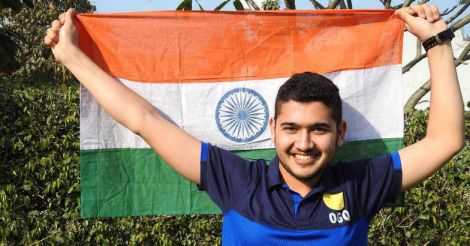 Anish achieved the feat when he stormed his way into the gold medal with a Games record in the men's 25m rapid fire pistol event at the Belmont Shooting Centre.

The Haryana boy shot down the CWG record in the final with a score of 30 including four series of 5 each.

The youngest in the field, he showed nerves of steel and led the more experienced shooters through the event to emerge deserving champion.

Australia's Sergei Evglevski claimed the silver with 28, while the bronze medal went to Sam Gowin (17) of England.

India's other entrant in the event, Neeraj Kumar (13) was the second shooter to be eliminated in the finals after a shoot-off.

By winning the gold, Anish bettered team-mate Manu Bhaker, who had become the youngest Indian Commonwealth Games gold medallist earlier this week when she emerged champion in the 10m air rifle finals.

In the qualifications, Anish scored 580 to finish top of the tally while Neeraj was second best with 579.

So talented is the shooter that the Central Board of Secondary Education (CBSE), in an unprecedented first, had agreed to reschedule three papers of his class X exams to help him avoid a clash between studies and competitive sports.

Friday's achievement was not lost on Anish.

On his next competition and plans of celebration, "Next are the World Championships (in South Korea) and Asian Games (Indonesia). I will celebrate with my coach."

The rising shooter recently won a gold medal at the ISSF Junior World Cup in Sydney where he finished atop the podium in the same event.

Last year, the teenager made heads turn when he won the 25m standard pistol gold with a world record score of 579 at the ISSF Junior World Championships, followed by silver in the 25m sport pistol at the same event and another silver at the Commonwealth Shooting Championships in Brisbane.