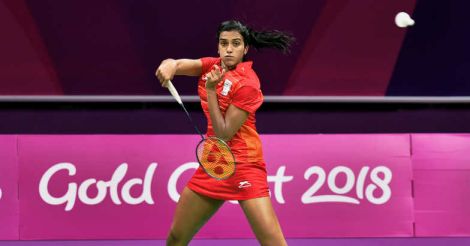 P V Sindhu, who had missed the mixed team competition due to an ankle sprain, knocked out defending champion Michelle Li 21-18, 21-8 in the semifinal. PTI

The 22-year-old Olympic silver medallist Sindhu, who had missed the mixed team competition due to an ankle sprain, knocked out defending champion Michelle Li 21-18, 21-8 in just 26 minutes while former world No.1 Saina had to dig deep to struggle past 2014 silver medallist Kristy Gilmour 21-14, 18-21, 21-17 in 68 minutes

2010 Delhi Games champion Saina and 2014 bronze medallist Sindhu had clashed at the Senior National championship finals last November with the former having the last laugh after a gruelling match.

Newly-crowned world No. 1 Kidambi Srikanth also progressed to the final of the men's singles after defeating 2010 Commonwealth Games silver medallist Rajiv Ouseph of England 21-10, 21-17 in little over half an hour.

However, three-time Olympic silver medallist Lee Chong Wei prevented an all-Indian men's singles clash by getting the better of H S Prannoy 21-16, 9-21, 21-14 in the other semifinal.

Earlier, young Indian pair of Satwik Rankireddy and Chirag Shetty also stood one step away from a historic gold medal as they reached the finals of the men's doubles event with a 21-18, 21-10 win over Sri Lanka's Sachin Dias and Buwaneka Goonethilleka.

Assured of at least a silver, Satwik and Chirag will be the first Indian pair to win a men's doubles medal at the Commonwealth Games.

"We started off pretty badly like till 17 we were down and in the end we played a bit more steady and smarter to take the game. The second game we started off confidently right from first point and that's what helped us," Chirag told PTI.

The duo will now play for the bronze medal against local hopes Setyana Mapasa and Gronya Somerville.

Ashwini and Satwik also went down fighting 22-20, 18-21, 16-21 to England's Marcus Ellis and Lauren Smith in mixed doubles semifinals and will play for bronze.