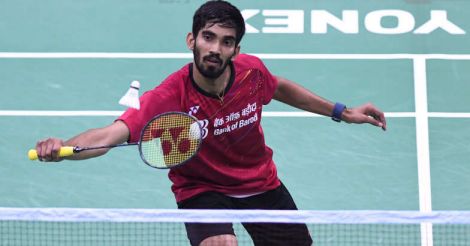 Gold Coast: Newly-crowned World No.1 Kidambi Srikanth let slip the early advantage to settle for a silver medal in the 21st Commonwealth Games, going down to Malaysian legend Lee Chong Wei in the men's singles summit clash here on Sunday.

Srikanth had beaten Lee in the mixed team championships final earlier in the Games but the former world number one rallied for a 19-21 21-14 21-14 triumph on Sunday for his third individual CWG gold. He has two more mixed team gold medals to his credit.

A decade older than the Indian, Lee kept his best for the last, showing off the legendary reflexes that have earned him cult status in international badminton.

But it was not all smooth sailing for him today as Srikanth started off confidently.

It took Srikanth just eight minutes to go from being 0-4 down to be 10-7 ahead. The Indian was the better of the two in executing drop shots and even managed to match Lee's ability to mix power with precision. Srikanth led 11-9 at the break.

Srikanth remained a step ahead until 14-13 before a misdirected smash gave Lee the equalising point.

But Lee was surprisingly off when it came to retrieving the shuttle and his usual agility on the court was only there in flashes. To Srikanth's credit, he made the most of his fancied opponent's lack of intensity and took the first game 21-19 in the 25 minutes.

A slight moment of drama came in the second game when it seemed Lee had struck the shuttle twice to claim a point but was not penalised for it and the match went on despite Srikanth's protest.

Lee's lackadaisical approach improved considerably thereafter and after leading 11-9 at the interval, he displayed some of the many stylish shots in his armoury to draw level and stay afloat in the high-intensity match, which was as much about elegance as sheer power.

Leading 9-5 in the decider, Lee went for a change of racquet and it only got him better results as he grabbed an 11-5 lead to take the psychological upper hand. The smashes that were landing outside in the opening game became just the bit accurate and difficult for the Indian to retrieve.

Lee did show the tendency to take things for granted, exhibiting poor judgement in leaving a shuttle while leading 16-8.

But even at his erratic worst, the Malaysian, who has multiple Olympic silver medals to his credit, was simply unstoppable for the Indian and claimed the match pretty comfortably.

The actress has been shooting back to back for her pending assignments since her return from Dubai.