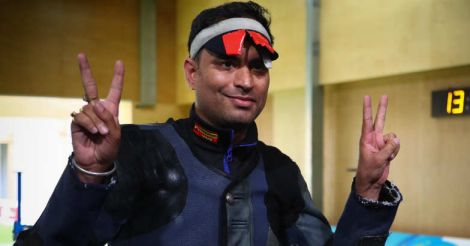 Sanjeev Rajput on Saturday claimed the 50m rifle 3 positions gold medal by creating a Commonwealth Games record in both qualification and final. AFP

Brisbane: Shooter Sanjeev Rajput on Saturday claimed the 50m rifle 3 positions gold medal by creating a Commonwealth Games record in both qualification and final, ending the Indian shooters' impressive campaign at the mega event on a high.

The 37-year-old qualified for the finals by scoring a total of 1180 (58x) while breaking Olympic medallist Gagan Narang's existing qualification record of 1166.

Rajput did not have the best of start in the finals as he shot 150.5 during the kneeling stage.

The Navy officer jumped to second place with a staggering 156.3 in prone.

With 98.7 from two shots in the standing-elimination stage, he grabbed the lead and stayed in front till laying claim to his maiden CWG gold.

Chain Singh, the other Indian shooter in the fray, finished fifth with 419.1.

In prone, Rajput shot three 100s and a 99 and while he continued his form into the finals, Chain could not, though he tried to make up with a strong showing in prone.

Canada's Grzegorz Sych clinched the silver medal with 448.4, while Dean Bale of England bagged the bronze with 441.2.

Rajput had won a silver in the same event at the 2014 Glasgow Games and a bronze in the 2006 edition of the Games held in Melbourne.

Rajput has been through a lot after a national level shooter accused him of rape and FIRs were lodged against him. He has been called for questioning by the Delhi police, leaving him shaken, but he has always maintained that he is innocent.

Though it shall remain a landmark CWG medal for him, Rajput expressed his disappointment at not being able to deliver in the kneeling position in final.

"For the qualification round, it was good, but I'm not happy with the finals. I'd say it was a weak final for me because I have been shooting 458 plus all the time, but this time it was weak in the kneeling position and I had to cover it somehow in the prone but, still again, not so good in the standing."

The Arjuna awardee, who could not make it to the 12-member shooting team for the Rio Olympics 2016, clinched a silver at the 2017 Commonwealth Shooting Championships.

On shooting being removed from the program for the Birmingham 2022 Commonwealth Games, he said, "I don't know how I feel, it's up to the decision committee, but I think definitely the shooting should be there because many nations do really good at it, especially the Indians."

In the men's trap event, Kynan Chenai and Manavjit Sandhu failed to qualify for finals, finishing seventh and eighth respectively.