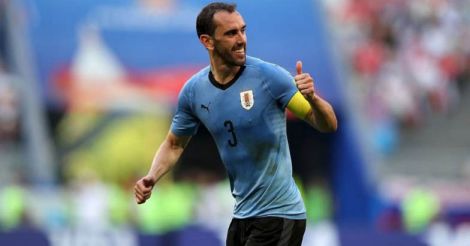 Rostov-on-Don: Uruguay captain Diego Godin is the leader of the only defence yet to concede a goal in the World Cup and the Atletico Madrid defender's wealth of experience in facing Cristiano Ronaldo will come in handy in his side's last 16 clash with Portugal.

With 27 meetings against Ronaldo in the bruising Spanish capital derby between Atletico and Real Madrid, winning eight times, drawing nine and losing 10, few players are better placed to come up with a strategy to shackle Ronaldo than Godin.

The five-times world player of the year may have filled his boots against Godin on several occasions, including two hat-tricks against Atletico, but the defender has also kept the prolific Portuguese quiet in many games, preventing him from finding the net in 13 of their last 20 meetings.

There has been little love lost when they have met: Ronaldo once punched Godin during a Spanish Super Cup tie, but the defender got his own back in a meeting last year by elbowing the Portuguese in the head. Both players escaped red cards.

Godin, 32, is one of the most senior players in the Uruguay squad, making his debut in 2005 and playing at three World Cups as well as winning the Copa America in 2011.

It was thanks to his header that Uruguay beat Italy 1-0 in their decisive group game in Brazil to reach the last 16 of the last World Cup and even though they fell to Colombia in the next round, the memory of the goal lives on.

Coach Oscar Tabarez revealed he used a picture of the towering header to inspire his players in his halftime team talk in their first game in this World Cup against Egypt, where they snatched victory with Jose Gimenez's late header from a corner.

Tabarez, who has coached Uruguay since 2006, has never hidden his admiration for his captain.

"Godin has always had a very defined personality, he shows solidarity and that has made him stand out the group and it has rubbed off on them too," he said last year.

"He earned the captaincy for his achievements and his commitment and his example, and in a certain way he represents the very best of a nation like Uruguay."

Godin, battle-hardened after years of working under Atletico coach Diego Simeone, has long been unapologetic about his country's uncompromising style.

"You can't turn your back on your collective DNA," he said before the tournament, where they won their three games to finish top of Group A.

"We've improved in possession thanks to the younger players but we haven't lost that commitment, that fight, the sacrifice and solidarity, the determination to overcome adversity."

Few players embody that determination like the Atletico defender, whose club have so boldly gone toe-to-toe with richer neighbours Real and their world class striker Ronaldo.

And if Uruguay can lock out Ronaldo again and send European champions Portugal home, Godin will surely have a lot to do with it.