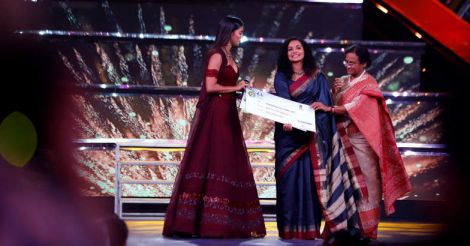 Parvathy won the recognition for her stunning portrayal of Sameera, a Keralite nurse stuck in war-torn Iraq.

Panaji: Mahesh Narayanan's directorial debut Take Off, the only Malayalam feature film screened at the 48th International Film Festival of India (IFFI), has made it big at the festival, winning two major awards.

The survival thriller, narrating the tale of a Keralite nurses' struggles in war-torn Iraq, won the Special Jury Award while its lead actress Parvathy Thiruvoth Kottuvata won the Silver Peacock for the Best Actress.

French film 120 Beats Per Minute was adjudged the Best Film. The film, directed by Morocco born French director Robin Campillo, is set in France in the 1990s and deals with homosexuality and the struggles of those suffering from AIDS. The film, starring Nahuel Perez Biscayart, Arnaud Valois and Adele Haenel, had its world premiere at the 2017 Cannes Film Festival.

The Golden Peacock Award for Best Film carries a cash prize of Rs 4 million (Rs 40 lakh) to be shared equally between the producer and the director, trophy and the citation.

The Special Jury Award of #IFFI2017 was presented to the Director @maheshNrayan for the film #TakeOff, which is based on the ordeal of Indian nurses in the city of Tikrit, Iraq. pic.twitter.com/L30SfTBbYX

"A real honor to receive the award. It is a story of children being assault victims; a Chinese story, it is also a story that is happening across the world. I truly hope that it finds resonance in India and across the world," she said on receiving the award.

The film is about the travails of two teenage girls who are assaulted by a middle aged man in a seaside town in China. Vivian's hard hitting social drama provides a social context for violence against women.

The highest honour of #IFFI2017, the Golden Peacock award for the Best Film goes to 120 Beats Per Minute #120bpm, directed by Robin Campillo pic.twitter.com/Lffl4M4kBx

Best Director gets the Silver Peacock Award and a cash prize of Rs 1.5 million (Rs 15 lakh).

The awards were presented at a star-studded closing ceremony of the film festival, attended by Bollywood stars Amitabh Bachchan, Salman Khan, Katrina Kaif and Siddharth Malhotra among others, here on Tuesday. Union minister for I&B Smriti Irani and Goa chief minister Manohar Parrikar were among the guests.

Parvathy won the recognition for her stunning portrayal of Sameera, a Keralite nurse stuck in war-torn Iraq.

An elated Parvathy dedicated the award to all the nurses in Kerala. "Sameera was an embodiment of hope in absolute darkness," she said after receiving the award. She also remembered late filmmaker Rajesh Pillai, for whom the film was made. She thanked director Mahesh Narayanan, who was also present at the venue.

#IFFI2017#TakeOff directed by Mahesh Narayanan is about Sameera. She is nurse & mother to 8 year old Ibru. She takes up a job in war-torn Iraq to overcome financial liabilities. #ParvathyThiruvothuKottuvata wins best female actor award for her performance in film. pic.twitter.com/XQjpzrGVaZ

The award was presented to her by UP minister for women's welfare Rita Bahuguna Joshi.

Receiving the special jury award from IFFI director Sunit Tanden, Narayanan said "I dedicate this to the nursing community from Kerala who work in several war-torn countries. They should be celebrated like we celebrate the military personnel".

The award for Best Actor (male) went to Argentine actor Nahuel Pérez Biscayart for his performance in 120 Beats Per Minute. The winners of the Best Actor awards are honored with the Silver Peacock Trophy and a cash prize of Rs 1 million (Rs 10 lakh each).

The criteria for the Gandhi Medal reflect UNESCO's fundamental mandate of building peace in the mind of men and women, particularly human rights, inter-cultural dialogue, promotion and safeguard of diversity of cultural expressions.

One of Canada’s most celebrated art house directors, Atom Egoyan was honored with the IFFI 2017 Lifetime Achievement Award. The prestigious award consisting of a cash prize of Rs 1 million (Rs 10 lakhs), Certificate, Shawl and a Scroll is conferred upon a master film maker for his /her outstanding contribution to cinema.

The Indian Film Personality of the Year Award was presented to Bollywood legend Amitabh Bachchan amid thunderous applause. An emotional Bachchan said he had a lot of affection for and memories of Goa where his first film Saat Hindustani was shot.