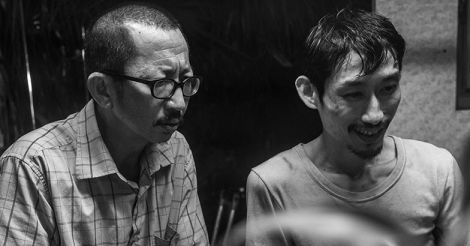 Writer-director Huang Hsin-yao's The Great Buddha+ is perhaps the best thing to have come out of Taiwan's art field in recent years. A black comedy, using the techniques of meta-cinema, this brilliantly made film explores the decadence and decay of society by drawing a parallel between the lives of the poor and the rich.

The film takes place in a small-town where Pickle works as the guard of at a factory that produces cast-iron statues. He is frequently visited by Belly Button, a scrap-collector. Having got Pickle's TV damaged, the two find a new mode of entertainment in the dash-cam videos of Pickle's master Kevin, an artist and an influential person among the big sharks of the town.

The footages featuring long drives and the audio of Kevin's sexcapades prove to be a great source of recreation for the simpletons, until they find something scary. The film gains a bit of tension as Kevin finds about the sort of snooping that had been going on.

In his attempt to portray a bleak picture with strokes of fun, the director makes use of techniques such as juxtaposing of visuals in color and black & white and voice over commentary that offers some witty observations.

The sins that stem from desire is perfectly placed against the reverence for Buddha; with the huge statue made by Kevin being a powerful symbol of the hollowness all high ideals come to represent over the years. The climax of the film is of high magnitude both in terms of substance and the style of making. The film ends abruptly leaving a lot to think over, yet with clear answers.