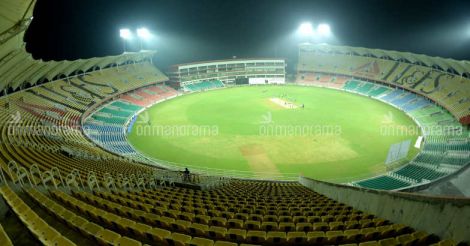 The Greenfield International Stadium has an official capacity of 45,000. Rinkuraj Mattancheriyil

Thiruvananthapuram: As the capital city is all set to host an international cricket match after a gap of 29 years, tickets sales for the T20 encounter between India and New Zealand have garnered a very enthusiastic response from fans.

Going by the excitement in the air, a capacity crowd is expected to witness the match to be played at the Greenfield International Stadium at Kariavattom on November 7. The stadium has an official capacity of 45,000.

Such has been the demand for tickets that the local organizers were forced to halt sales through notified bank branches in other districts to cater to the huge demand for online tickets. The general feeling is said that the overwhelming response would prompt the Board of Control for Cricket in India (BCCI) to allocate more matches to the state.

All the tickets for the match have been sold out, confirmed KCA secretary Jayesh George.

Notably, the ODIs hosted by Kochi in the past had not matched the expectations and the reputation of the sports-loving state as the organizers managed to sell a maximum of 3,000 tickets via online.

Taking that into account, the KCA decided to sell tickets for the New Zealand-India tie through select branches of Federal Bank across the state. To the surprise of the organizers, there was a huge demand for tickets even from the neighboring states when online sales commenced on October 16.

“As much as 80 per cent of the tickets were sold online. The remaining tickets, that were available at main Federal Bank branches in Thiruvananthapuram, were also sold out within hours,” said Jayesh.

Security to be beefed up

The practices sessions of both teams would also be held under a blanket of heavy security cover. Security will be beefed up at The Leela, Kovalam, as well, where the players will be accommodated. There will be restrictions on items that fans could bring into the stadium, officials said.