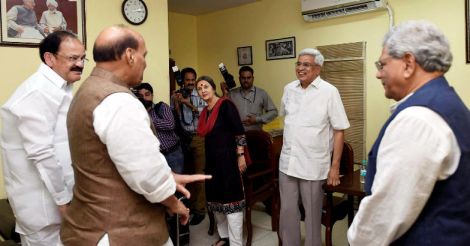 New Delhi: Union ministers Rajnath Singh and M Venkaiah Naidu met CPM general secretary Sitaram Yechury on Friday to build consensus on the presidential nominee, but did not propose any name, prompting the Left leader to dub the parley as "more like a PR exercise" by the government.

Speaking to reporters after the nearly 30-minute meeting held at the CPM head office here, Yechury reiterated his party's stand that a person with "impeccable secular credentials" should be the next president.

The CPM leader said the opposition parties would wait till the government completed the round of discussions with them to take a call on their nominee for the July 17 presidential election.

According to sources in the CPM, the Left party wanted to know from the ministers, who are part of a committee the BJP has floated to evolve consensus on the presidential nominee, if former Delhi Metro chief E. Sreedharan was the NDA's candidate, as reported by a website.

The ministers, the sources said, denied the report and told Yechury that the government was yet to finalize any name.

A senior CPM leader wondered if the RSS-BJP combine would let go the opportunity to install a president of their choice since "they are so close to" electing one to the post.

"They told us they want our support. We said fine, tell us the bases for the support, who is the candidate. But that they did not convey...they will take some time to do that," Yechury told reporters after the meeting.

Yechury said it was required for the government to suggest names for arriving at a consensus.

With no name proposed by the government, Yechury said, the parleys looked "more like a public relation exercise" of meeting opposition parties.

"Since the government is doing it, we welcomed them in our office. Very good, they came here," he said.

Countering the opinion that the opposition should support the ruling alliance's candidate since it has the people's mandate, Yechury said the NDA had polled 39 percent votes during the 2014 general polls as against 61 per cent of the opposition.

"So, a candidate of the opposition is the one who has the mandate. So, the government should also consider that aspect," he said.

Yechury insisted the Center should also be open to considering the names suggested by the opposition if it made any proposal.

"They said they will get back to us in case they come to some decision on a candidate," Yechury added.

The sources said that Naidu stated during the meeting that the government was aware of the names being discussed by the opposition parties as their probable candidates as the "media has already reported their names".

"They said they know the names (of the opposition's probable candidates including Gopal Krishna Gandhi). So, it was expected they (government) will suggest some names. But unfortunately, that has not come," one of the sources said.

The meeting followed Singh and Naidu's meeting with Congress chief Sonia Gandhi earlier in the day.

The two ministers are expected to meet CPI leaders later in the day.