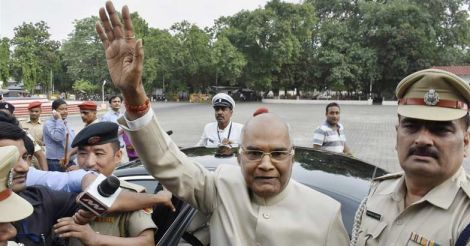 Donning a white yoga-themed T-shirt, he joined dignitaries and other enthusiasts at the iconic venue and performed routines for about 45 minutes.

"We are all here to do yoga. Everyone should do yoga," Kovind told reporters after arriving at the venue.

The presidential nominee, who arrived in Delhi on June 19, hours after his name was announced by the BJP, has been accorded a 'Z+' cover of NSG commandos.

Mediapersons sought to ask questions, but were fended off by NSG commandos.

The election of Kovind as India's 14th President is a virtual certainty with several non-NDA parties too lending their support to BJP's surprise candidature of the low-profile dalit leader and a former lawyer.