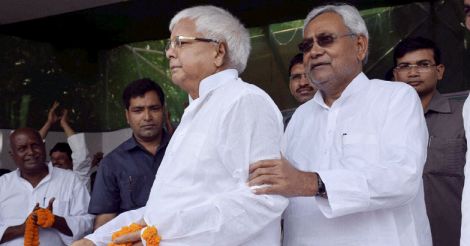 Mayawati announced her party's decision taking exception to Kovind's association with the "narrow ideologies" of the BJP and the RSS.

Mayawati said Kovind had been associated with the "narrow ideologies" of the BJP and the RSS right from the beginning. "Hence, I do not subscribe to his political background," she said in a statement issued here.

"In the new circumstances, after comparing the qualities of the two candidates it is clear that UPA candidate Meria Kumar is more capable and popular than the NDA nominee. Hence, our party declares support to Meira Kumar for the presidential poll," she said.

Terming Meira Kumar a "Bihar ki Beti", said the JD(U)'s decision to support NDA nominee Ram Nath Kovind was a "historic blunder" and called for a review. But JD(U) ruled out any change in its stance.

"Today, I am appealing to (Bihar chief minister) Nitish Kumar to reconsider his decision and support the daughter of Bihar," Lalu Prasad told reporters after Meira Kumar was fielded after a meeting of 17 opposition parties led by the Congress.

"Don't make a historic blunder. It was a wrong decision of your party (to back Kovind)," Lalu added.

The RJD leader's remarks came a day after the JD(U) announced support to Kovind in the July 17 presidential election. The JD(U) also skipped the opposition meeting here.

Lalu Prasad's RJD and Nitish Kumar's JD(U) along with the Congress are partners in the ruling Grand Alliance in Bihar.

Lalu said he would meet Nitish Kumar and urge him to reconsider his decision to support Kovind.

"I am going to Patna tomorrow (Friday). I will speak to him. I will tell him not to make a historic blunder by supporting Kovind. He should not give up the ideological battle," he said.

The RJD chief said it was Nitish Kumar who took the initiative to unite the opposition on the Presidential election.

"We had come together to stop the fascist forces," the RJD leader said.

The RJD chief made it clear that despite JD-U's decision to back Kovind, there was no threat to the Bihar government.

The Opposition on Thursday unanimously decided to field Kumar, a dalit, as its joint candidate for the presidential election against Kovind, with 17 parties supporting the former Lok Sabha speaker's candidature.

The decision was taken at a meeting of the 17 non-NDA parties in Parliament House Library, with the leaders endorsing the name of the former minister and diplomat, whose father, ex-deputy prime minister Jagjivan Ram, was often hailed as one of the tallest dalit leaders in the country.