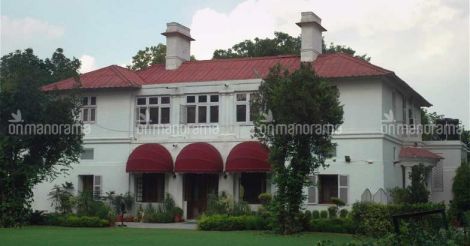 New Delhi: Finishing touches are being given to an iconic heritage bungalow in Lutyens' Delhi to welcome outgoing president Pranab Mukherjee who demits office Monday.

The 10, Rajaji Marg mansion will now be the humble abode of 81-year-old Mukherjee as he moves out of the grand Rashtrapati Bhawan, where he had assumed office as the 13th president on July 25, 2012.

The Raj-era bungalow, endowed with sloping red-tiled roof and fitted with chimneys, has been given a fresh coat of paint while its wide lawns and gardens spruced up.

The two-storey house had also served as a retirement home for former president the late A P J Abdul Kalam till his death in 2015, after which it was allotted to union culture minister Mahesh Sharma.

Sharma vacated the 10, Rajaji Marg house after it was allotted to Mukherjee and has shifted to the bungalow at 10 Akbar Road, a single-storey Lutyens' mansion, a senior official said.

Incidentally, the minister's official bungalow is also serving as a temporary residence of president-elect Ram Nath Kovind, who has been staying in it since filing his nomination as the NDA candidate.

And, so, while Mukherjee, after bidding farewell to Rashtrapati Bhawan, will move to the bungalow previously occupied by Sharma, Kovind will ascend to the country's first residence from the minister's present official bungalow, in what can be described as a sort of full circle to the tale of these two presidents.

The 10, Akbar Road bungalow on the day of the declaration of the presidential poll result last week, had begun to assume the aura of a residence of the Head of State, as a string of visitors, from Union ministers to senior leaders and MPs poured in to congratulate Kovind on his victory.

Both bungalows, built during the creation of the new imperial capital of the British Raj, would now be bracketed with the highest symbol of democratic India.

The two residences are also emblematic of architectural excellence as evidenced in the 10, Akbar's white pillars or the 10, Rajaji's sloping roof.

The 10, Rajaji Marg house is spread over an area of 11,776 sq feet with the ground floor housing a library and an attached reading space.

Mukherjee retires as the president, crowning a political career of over five decades of exemplary service to the nation in the government as well as Parliament.

Kovind last served as the governor of Bihar before being elected as the successor to Mukherjee.

A retired president is entitled to rent-free accommodation anywhere in India with free water and electricity for the remainder of his or her life as per the President's Pension Rules, 1962.

Rajaji Marg was earlier known as King George Avenue (named after British monarch King George V). After Independence, it was renamed after C. Rajgopalachari, the last governor-general of India, who was fondly called 'Rajaji'.