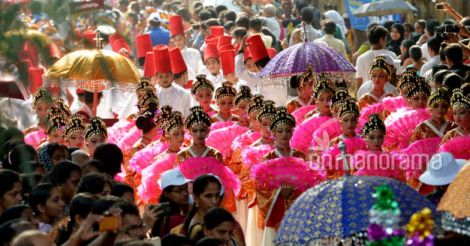 Thiruvananathapuram: The Quality Improvement Programme (QIP) has recommended the government to conduct the school youth festival from 6th – 10th January at Thrissur bringing down the number of festival days to five. It has been decided to increase the number of stages to limit the annual arts and cultural gala to five days. The extravagant and colorful rally conducted to mark the beginning of the festival week would be avoided; and instead a cultural meet would be organized.

In a significant move the QIP has shunned the practice of adjudging the top three at the arts extravaganza and also removed the cash price which goes with it. Instead a one time scholarship of Rs 2500 would be given for all the contestants who secure an A grade. The qualifying marks to secure grade A has been raised from 70 to 80; 60 to 70 for grade B; and 50 to 6o for grade C.

Mono act, mimicry, folk dance, Keralanadanam, Kathakali, and Ottanthullal competitions would be conducted as a single event for both girls and boys contrary to the previous years.

Dismantling the infrastructure of snobbery and other demons

The ups and downs of 57th State School Kalolsavam

The committee has recommended strong guidelines for the qualifications of the judges as well.

The judges of sub district youth festival should not be again called for evaluating the competitions of district festivals. The same is applicable to the judges at the district level as they must not be invited to evaluate the same artform at the state level.

Another guideline placed is that the same judge should not be called for more than two consecutive years.

Group song competition has been introduced at the high school level instead of 'ganamela'; and there won’t be marks awarded for direction in drama competition.

The QIP meeting was convened by the director of public instruction K.V. Mohankumar, with the  leaders of the various teacher’s unions on board.

The amount to be paid for making an appeal would remain Rs 500  at the school level while it has been increased at all the other levels. At the revenue district level the amount has gone up from Rs 1500  to Rs 2000 while it would be Rs 2500 at the state level competitions.

Thank you, Kannur, you surprised us with love

A special committee has been formed with Additional DPI as the chairman to solve the problems or conflicts that may arise at the state level competitions. It has been instructed to conduct the school level competitions only on Friday and Saturday to avoid losing academic hours. The number of competition events at the LP level has been increased from 16 to 22 by including Tamil and Kannada elocution and recitation, English and Malayalam action songs and English recitation.

At the UP level, Tamil and Kannada elocution and recitation and English skit has also been included taking the number of items up from 30 to 36.

There will be 89 competition events in 15 categories at the high school level. All the contestants who win prizes at the school level literary competitions can take part in the sub-district festival as well.