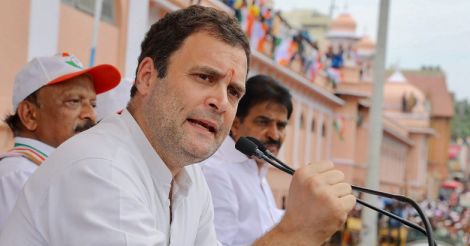 Congress president Rahul Gandhi addresses during an election campaign rally ahead of Karnataka Assembly Elections 2018 in Bengaluru on Wednesday. PTI

Bengaluru: Congress president Rahul Gandhi said on Thursday prime minister Narendra Modi saw a "threat" in him, and that the latter's attack on him over his prime ministerial ambition was only aimed at "distracting attention".

Gandhi also hit out at Modi for raking up the issue of UPA chairperson Sonia Gandhi's foreign origin, saying she was "more Indian" than many Indians.

"This election is not about Rahul. I have now learnt to deal with the prime minister. When he can't respond, he distracts," Gandhi told reporters in response to a question about Modi's repeated attacks on him yesterday over his prime ministerial ambition.

Training his guns on Gandhi after he publicly declared his prime ministerial ambition at an interaction here, Modi had wondered whether the country will ever accept such an "immature and naamdar (dynast)" leader for the post.

Hitting out at Modi for his reference to Sonia's foreign origin, Rahul said, "My mother is an Italian. She has lived the larger part of her life in India. She is more Indian than many, many Indians I have seen.

The issue of Sonia Gandhi's foreign origin was raked up by Modi at an election rally recently where he dared the Congress chief to speak for 15 minutes about the achievements of the Karnataka government in any language, including his "mother's mother tongue".

Modi was responding to Gandhi's earlier dare to allow him to speak for 15 minutes in Parliament on various issues, including corruption, and that the prime minister will not be able to sit for 15 minutes.

The Congress president, who wrapped up his extensive campaign tour of Karnataka with a press conference, referred to a story about Gautam Buddha to claim the prime minister had "anger" for everybody.

He said once Buddha was abused and shouted at by an angry man while he was seated with a disciple. When the disciple asked Buddha why did he not retaliate, he said the anger belonged to that man, and that since he did not accept the abuse, it went back to that person.

"Modi has anger inside. He has anger for everybody, not just me....and he sees a threat in me," he said.

The Congress president flayed the prime minister for his "silence" on incidents of killing of Dalits and attacks on them.

When asked to comment on the prime minister's claim that the Congress party raised the issue of Dalits only for the sake of raising it, he said,"We will take up their issues. It is our job."

"When Rohit Vemula (a Hyderabad student who committed suicide over alleged discrimination) dies, he does not utter a word. When Dalits are beaten up in Una, he keeps quiet," he said.

Accusing the prime minister and the BJP of shielding Karnataka's influential and controversial Reddy brothers, he said the government had turned the "Central Bureau of Investigation into Central Bureau of Illegal Mining" to save the Reddy siblings.

Two of the Reddy brothers and several associates have been fielded by the BJP in the Karnataka polls.

When asked about his visits to places of worship, particularly temples, and the BJP's description of him as an "election Hindu", Gandhi said, "BJP gets uncomfortable when I go to a temple."

Gandhi said he visited not just temples but also other places of worship.

"I don't think BJP understands the term Hindu," the Congress leader said, adding that calling him an "election Hindu" showed their state of mind.

Gandhi said the Modi government had "decimated" the country's foreign policy and that a "disaster" was in the making on that front.