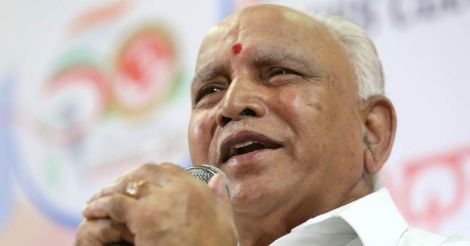 Yeddyurappa had, before the results were announced, said that he would be the chief minister.

Bengaluru/New Delhi: Amid intense jockeying for power and allegations of horse-trading, Karnataka governor Vajubhai Vala on Wednesday invited the BJP's B S Yeddyurappa to form the government in the state, prompting the Congress to move the Supreme Court accusing the governor of acting as a "stooge" of the saffron party.

JD(S) leader H D Kumaraswamy, who has support from the Congress for chief ministership, accused the BJP of luring his MLAs with Rs 100 crore bait, while outgoing CM Siddaramaiah alleged that prime minister Narendra Modi was encouraging "horse-trading" to ensure the BJP returns to power in the state despite falling short of a majority.

"I invite you (Yeddyurappa) to form the government and be sworn-in as the chief minister of Karnataka," a Raj Bhavan communique said after day-long politicking that saw claims and counter claims of support of MLAs.

The Congress, which termed the governor's decision an "encounter of the Constitution", urged chief justice Dipak Misra to hold an urgent hearing Wednesday night itself since Yeddyurappa is slated to take oath as chief minister at 9 am on Thursday.

The Congress also launched a fusillade against Vala at a press conference, with Congress' chief spokesperson Randeep Surjewala dubbing him a "stooge" of the BJP and accusing him of encountering the Constitution at the behest of prime minister Modi and the BJP chief.

The Karnataka Governor is acting as a stooge of the BJP. He has shamed the office of the governor by inviting the BJP to form government and allow its leader B S Yeddyurappa to take oath as chief minister, he told reporters.

The moment that crores of Kannadigas are awaiting is here.

Sri @BSYBJP will take oath as Chief Minister of Karnataka tomorrow morning at 9.00 AM at Raj Bhavan.

The movement to build our Suvarna Karnataka has started. #CMBSY

Surjewala also hit out at Vala, accusing him of denigrating the Governor's office, trampling upon Constitution and abusing law and acting like a "BJP puppet".

Vala, Surjewala charged, chose to serve "his masters in the BJP" than serving the Constitution.

Congress leader P Chidambaram also alleged that the governor has given Yeddyurappa 15 days time to "convert" the number of 104 legislators to 111.

BJP, however, asserted that it would prove its majority in the assembly and dubbed the Congress-JDS post-election alliance "unholy and unacceptable."

BJP national general secretary Rao said the understanding between the Congress and JD(S) was only "to keep the BJP off."

"We will not let it go easily...", a furious Kumaraswamy told reporters here shortly after the governor wrote to Yeddyurappa asking him to take oath.

Kumaraswamy said the governor should have given three or four days time for Yeddyurappa to prove his majority. "He (Yeddyurappa) has no majority," he said.

Toiling hard to control the levers of power in Karnataka, Yeddyurappa and Kumaraswamy, the leader of the newly formed JD(S)-Congress alliance, had earlier met Vala and staked claim to form the government.

With 104 MLAs in the 224-member Assembly, the BJP is the single largest party, while the JD(S)-Congress coalition, formed after the election results were declared, has 116 legislators. It has also claimed support of an independent MLA.

With there being precedents of both governors inviting either the leader of the single largest party or that of a post-poll coalition to form the government, Vala, a former RSS-BJP veteran from Gujarat, opted for the former.

Earlier in the day, Kumaraswamy claimed the BJP had offered his MLAs Rs 100 crore and ministerial berths to break ranks and back the saffron party.

The allegations were promptly dismissed by the BJP, with Union minister Prakash Javadekar dubbing them as "imaginary".

Kumaraswamy also alleged the BJP was trying to repeat "Operation Kamala" to come to power.

"Operation Kamala" was a term used in 2008 when the BJP did not have a majority of its own in the Assembly and its leaders managed to persuade three Congress and four JD(S) MLAs to resign, allegedly by offering them money and office.

There were reports that MLAs of the JD(S) and Congress would be lodged in tourist resorts to ward off threats of "poaching" by the BJP.