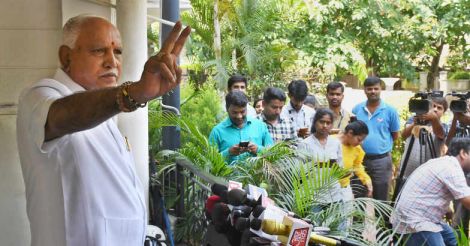 We will obey the Supreme Court order, said Yeddyurappa.

New Delhi: Welcoming the Supreme Court order for a floor test, Karnataka chief minister B S Yeddyurappa on Friday asserted he was "100 per cent" confident that he would prove the majority in the state Assembly. "We will abide by the Supreme Court verdict...we have got 100 per cent support and cooperation to prove the majority," Yeddyurappa told reporters here soon after the apex court's order.

"Amidst all these political games, we will prove our majority tomorrow. We will obey the Supreme Court order," said Yeddyurappa, who faces an uphill task of rustling up the 112 MLAs required to cross the floor test hurdle.

Yeddyurappa said he would discuss with the chief secretary and call the Assembly session, and other procedures will follow.

Union minister Prakash Javadekar, who was also the BJP's Karnataka poll in-charge, on Friday expressed confidence that the Yeddyurappa government will prove its majority in the state Assembly on Saturday.

"BJP is ready and confident of winning trust vote in Karnataka. We will prove our majority on the floor of the House," he tweeted. His tweet came after the Supreme Court ordered that a floor test be held in the Karnataka Assembly at 4 pm on Saturday to ascertain whether newly appointed BJP chief minister B S Yeddyurappa enjoys majority in the state.

The BJP, which emerged as the single largest party with 104 seats in Karnataka Assembly, was invited by governor Vajubhai Vala to form the government despite the JD(S)-Congress combine staking claim by citing the support of 117 MLAs.

The majority mark is 112 seats. Elections were held for all but two of the 224 seats. Yeddyurappa took oath as chief minister in Bengaluru yesterday. Governor Vala had given him 15 days' time to prove majority in the House.