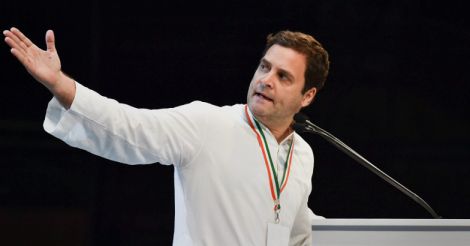 Sarcastic trolls often credit Congress leader Rahul Gandhi for several election victories of arch-rival BJP. Will they ascribe the ascension of JD (S) to power in Karnataka to the Congress president?

Each time BJP won a state, it was dubbed as Modi’s victory, Modi wave, Amit Shah’s Chanakya Sutra and so on.

So, the BJP’s loss in Karnataka should be read as anti-Modi wave and a failure of Amit Shah’s strategy. Then, it will also mean a victory for Rahul Gandhi and his leadership.

It was indeed the masterstroke of Congress to give unconditional support to JD(S), thereby nixing BJP’s plans in the state. Shouldn't Rahul-haters now give credit to the Congress party president after BJP lost its fight to place its man on the chief minister's seat?

Rahul Gandhi took over the reigns of the party at its worst time but did manage to give the BJP a run for its money not only in Karnataka, but also in Gujarat and Goa. The party couldn't manage outright win in any of these states, but they put up a spirited fight for what would have otherwise been a cakewalk for the BJP.

Some criticised Rahul’s absence in Karnataka after the election results were announced even as BJP titans Modi and Shah were also not present in the southern state for the swearing-in ceremony or the fiascos before and after. It is understandable that all the leaders maintained silence during the planning and strategy implementation stages, as they asked their party confidantes make the crucial moves in the state.

In Karnataka, the Congress was also quick. It did not repeat the past mistakes. Its leaders were sent to the state ahead of the results and announced the support for JD(S) even as the full results were yet to be out.

Moving the court at midnight, contesting the governor’s decision in other states, holding protests across the country, moving court again over the appointment of the pro-tem speaker, all were quick decisions that dented the image of BJP nationally.

As these happened within a short span of 72 hours hours, the BJP got cold feet. The saffron party, which was ‘100 per cent confident’ after the election, did not wait to face the floor test and cowed down after the successive blows in Karnataka.

Whether or not all these were the brainchild of Rahul Gandhi, then as president of the Congress party, he deserves due credit for the victories of his party, especially when he is criticised for the losses of his party.