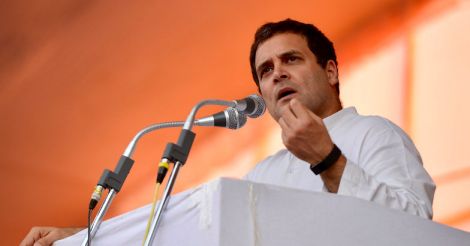 Gandhi said that the Bharatiya Janata Party's (BJP) bluff has been called out by the court and the party will now try to form government through money and muscle.

"Today's Supreme Court order, vindicates our stand that governor Vala acted unconstitutionally. The BJP's bluff that it will form the government, even without the numbers, has been called out by the court.

"Stopped legally, they will now try money and muscle, to steal the mandate," Gandhi said in a tweet.

The Congress president's remarks came after the Supreme Court ordered a floor test in the Karnataka Assembly at 4 pm on Saturday.

BJP legislative party leader B S Yeddyurappa was on Thursday sworn in as the chief minister after the May 12 elections threw up a hung assembly.

The BJP had won 104 seats in the Assembly elections held in 222 segments, falling eight short of the 112 halfway mark. The Congress won 78 seats and the Janata Dal-Secular (JD(S)) 37. The Congress later said it would support a JD(S) led government.