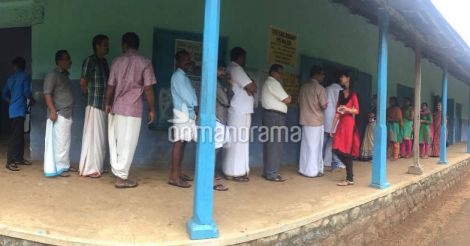 Malappuram: The election commission is planning a massive campaign to increase the voter turnout in the assembly byelection in Vengara. A host of programs including oaths and quizzes have been organized to attract the new voters to the polling booths.

Assistant district collector Arun K Vijayn led the oath of voting at the IVHSS at Parappur on Monday. Similar programs were held at IV Arts and Science College and GHSS at Othukkungal. Kunnumpuram AM College and Cheroor PPTMYHSS will also have such programs in the coming days.

A quiz competition will be held at Vengara GVHSS on October 4 for anyone aged over 25. Candidates have to go to the school with a photo identity card.

The election commission has launched a campaign to bring in as many women voters and new voters to the polling booths. The campaign named ‘Sweep’ is run from three vehicles which roam the constituency. A social media campaign is also underway.

Vengara has the lowest share of women voters in Malappuram district, as per data from 2016.

As many as 1,000 poll officials have been finalized for the assembly byelection. The constituency has five polling booths completely under the care of women. Thirty women have been selected for the job.

Vengara will turn a model to the rest of the state on election day, when all polling booths will have wheelchairs and special ramps for the differently abled voters. The district administration is planning to collect as many wheelchairs from the hospitals and palliative care units in the area to comply with a direction from the Election Commission of India.