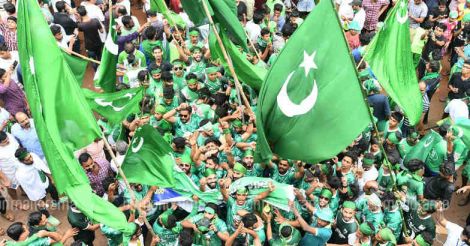 Malappuram: The Indian Union Muslim League (IUML), a key partner in the Congress-led UDF opposition in Kerala, Sunday retained the Vengara Assembly seat by defeating its nearest rival CPM candidate in the by-poll.

Khader thanked the people of the constituency after the victory.

"I am going back with lots of happiness as the Left did their best to see the back of me, but I managed to win easily. I thank all the people of this constituency and the UDF leaders," said Khader.

A total of 502 voters pressed the NOTA button.

The by-election was necessitated when sitting legislator and top IUML leader P.K. Kunhalikutty vacated the seat after he was elected from the Malappuram Lok Sabha constituency in April.

IUML - the second biggest constituent of the Congress-led UDF - had fielded two-time former legislator Khader. However, the UDF's victory margin was less than it received in the 2016 assembly polls, in the segment considered to be a stronghold of the IUML.

However, senior Congress leader A.K. Antony said Khader may not have the same influence as Kunhalikutty, who was from Vengara.

Kunhalikutty said the LDF's 'solar' bomb has not affected the mood of the electorate. The LDF government had on the day of polling ordered for a Vigilance probe would against former chief minister Oommen Chandy in the multi-score solar scam.

Leader of the opposition in the Kerala Assembly, Ramesh Chennithala, said even after LDF 'misused' official machinery, the UDF candidate won the by-election.

Basheer said that he has been able to break the myth that the IUML was all prevailing and powerful.

"Just see the votes that we have managed to get and we could take the fight a into several strongholds of the IUML," he added.

Meanwhile, CPM state secretary Kodiyeri Balakrishnan said the results showed that the Congress-led opposition was on its way out.

"The IUML might have a technical victory, but we have scored a political victory."

Kerala chief minister Pinarayi Vijayan said that the LDF had put up a good fight in Vengara. He also said that the BJP has suffered a huge setback and cautioned that the SDPI's growth needs to be checked.