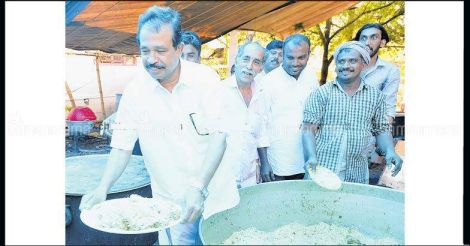 Malappuram: There is no escaping the biriyani when you are campaigning in Vengara. Candidates wafted through the flavors of the feast as they sought votes for the upcoming assembly by-election. After all weddings are the biggest crowd pullers in this part of the world.

United Democratic Front’s K.N.A. Khader managed to attend at least nine weddings across the constituency in a single day. His tour started at Vengara and proceeded through Parappur, AR Nagar and Kannamangalam. And he could not leave until he tasted the biriyani.

Left Democratic Front’s P.P. Basheer had to visit a couple of mourning families at Atteeri and Iringallur before he went wedding-hopping in the Vengara and Kannamangalam panchayats. He also attended a religious program.

The major candidates came face to face at Oorakam when they went for the inauguration of a furniture showroom. Khader and Basheer chatted with each other before going their ways in a bid to outvote each other.

As many as 1,000 poll officials have been finalized for the assembly by-election. The constituency has five polling booths completely under the care of women. Thirty women have been selected for the job.

The election commission has launched a campaign to bring in as many women voters and new voters to the polling booths. The campaign named ‘Sweep’ is run from three vehicles which roam the constituency. A social media campaign is also underway.

Vengara has the lowest share of women voters in Malappuram district, as per data from 2016.

Vengara will turn a model to the rest of the state on election day, when all polling booths will have wheelchairs and special ramps for the differently abled voters. The district administration is planning to collect as many wheelchairs from the hospitals and palliative care units in the area to comply with a direction from the Election Commission of India.