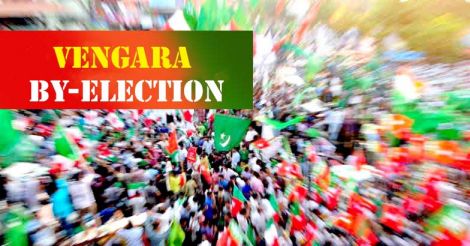 The police have put in place traffic restrictions in the State Highway and Vengara for the Kalashakottu, or the final hours when party workers loudly proclaim their might.

Malappuram: The campaign for the by-poll to the Vengara Assembly constituency, a dull affair initially which later assumed high-decibal political proportions, comes to an end at 6. pm Monday.

The police have put in place traffic restrictions in the State Highway and Vengara for the Kalashakottu, or the final hours when party workers loudly proclaim their might.

Campaign vehicles will not be allowed in the Malappuram-Parappanangadi stretch from Karathodu to Kuriyadu, the police said.

But party workers can organize meetings and joyous celebrations in each panchayat.

Only silent campaign will be allowed on Tuesday. Polling will be held on Wednesday.

The LDF, UDF and the BJP tried hard to raise the pitch on the Sunday, the penultimate day of the campaign.

The LDF unleashed its star campaigner V.S. Achuthanandan, who wooed a mammoth crowd with his wit.

The CPM veteran unleashed a scathing attack on the Congress, the IUML and the BJP and said a 'CO-LE-B,' alliance, or an umbrella alliance of the Congress, League and BJP is functioning in Vengara too.

The CPM is also carrying out protest marches in Malappuram and Vengara early on Monday against the attack on its party workers in Panur in Kannur on Sunday, where the party has called for a dawn-to-dusk hartal.