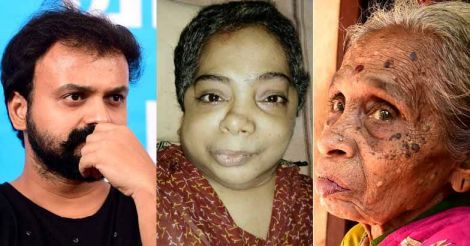 Kasaragod: Kunchacko Boban was once Kerala's undisputed 'chocolate hero', an image bestowed on him by a number of romantic heroes he played on the screen. The actor, who has become more choosy in his second stint in tinsel town, is nowadays known for his more matured characters. However, an old woman in a village in Kasaragod knows Kunchacko's lesser known face – that of undoubted humanity.

Kunchacko has been providing a monthly pension of Rs 5,000 to Devaki, whom he met during the shoot of his film 'Valiyachirakulla Pakshikal' at Enmakaje village of Kasaragod district. The critically acclaimed film, directed by Dr Biju, realistically narrated the tragic tales of the victims of uncontrolled spraying of highly poisonous pesticide endosulfan in the northern district.

Devaki's daughter Sheelavathi had a rare genetic disorder as a side-effect of the deadly pesticide.

Kunchacko Boban played the role of a photo journalist in the movie, and in one of the scenes his character meets Sheelavathi.

When he learned that it was Devaki, the real life mother of Sheelavathi, who sat near her, the actor, for a moment, forgot that he was playing a character. Kunchacko cried like a little baby hugging that mother who had taken care of her daughter all her life.

For more than four decades, Sheelavathi was bed ridden as her body shrank due to the effect of endosulfan. Devaki, who found a livelihood by chopping grass and selling it, took care of her daughter like a little infant.

After coming to know about the elderly woman's tragic fate, Kunchacko decided to do something for her and then the idea of a monthly financial aid struck him.

Kunchacko Boban was worried who would take care of Sheelavathi if her mother dies. But leaving her mother alone, Sheelavathi passed away on February 11; endosulfan claimed one more of its many victims.

The actor, who had promised Devaki that he would be there for her, makes sure that she is taken care of. He has even deposited the pension amount for a year in her account.