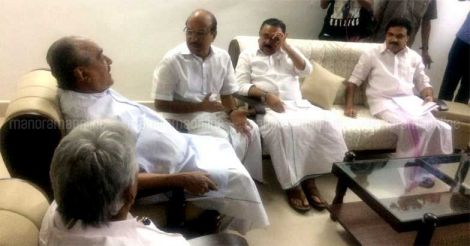 Pala: A UDF delegation met K M Mani on Monday seeking the support of his party Kerala Congress (M) for the Chengannur bypoll. The UDF leaders, at the meeting held in Mani’s residence in Pala, also requested him to return to the UDF.

However, Mani said that a decision can be taken only by his party. The matter will be discussed on Tuesday, Mani told the UDF leaders.

Mani later told reporters that the sub-committee of his party would meet at 10.30 am on Tuesday in Pala and decide on the matter.

The Kerala Congress (M) supremo had earlier said that he would announce the stand to be adopted by his party for the Chengannur bypoll on Tuesday. The UDF team met Mani a day before this announcement was to be made. However, Mani has given no indications about whom his party would support in the bypoll. Though a meeting had been held earlier to discuss the issue, no decision was taken.

A striking feature of the meeting was the cold attitude displayed by Mani towards Ramesh Chennithala. While he greeted the UDF leaders by shaking hands, Mani did not offer the same to Chennithala.

KC(M), a former partner in the UDF, had severed its 30-year-old ties in 2016 following differences with the lead partner Congress.