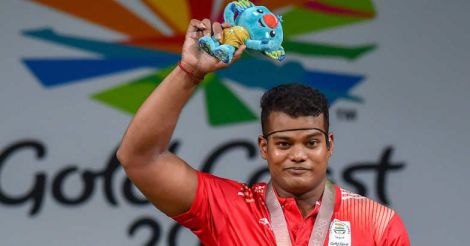 Gold Coast: Sportspersons are known for being superstitious and Indian weightlifter Venkat Rahul Ragala is no exception. Rahul, who clinched the 85kg gold at the Commonwealth Games here on Saturday, wears his late mother's anklet around his forehead as a good luck charm.

"I had been weakened by a knee injury during the Commonwealth Championships last year. But the coaches supported me immensely to get this medal. I haven't been able to train that well," he said.

The Indian was locked in a close battle with Samoa's Don Opeloge, who ended with a total of 331kg (151kg+180kg). Both the lifters opted for 191kg as their final clean and jerk lift and both of them failed but Rahul clinched the top prize owing to Opeloge's failed second attempt at a 188kg lift.

"This is the most important medal of my career," said the CWG debutant whose father R Madhu was a national-level weightlifter.

Had Opeloge managed a good final lift, Rahul would have ended with a silver as he had already fouled his third attempt.