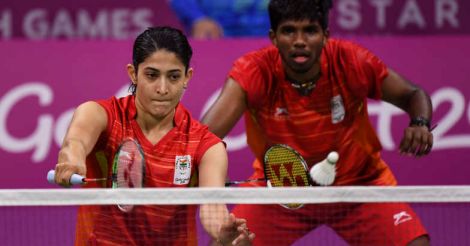 Ashwini Ponnappa and Satwik Rankireddy in action against Yong Hee and Jia Woing of Singapore during the mixed team badminton semifinal tie in Gold Coast on Sunday. AFP

Gold Coast: World No.2 Kidambi Srikanth and London Olympics medallist Saina Nehwal guided India to the final of the mixed team badminton event, beating Singapore 3-1 in the semifinal at the 21st Commonwealth Games here on Sunday.

India got to a 1-0 lead after the mixed doubles duo of Satwik and Ashwini overcame a stiff challenge from Yong Kai Terry Hee and Jia Ying Crystal Wong to win 22-20, 21-18 in a 42-minute contest.

Srikanth, the top seed doubled India's lead by going past Kean 21-17, 21-14 in the men's singles match that lasted for 37 minutes at Court 1 of the Carrara Sports Arena 2.

India, however, suffered a blow in the third tie of the contest, as the men's doubles pair of Satwik and Chirag, went down 21-17, 9-21, 12-21 to Yong Kai Terry Hee and Danny Bawa Chrisnanta.

With the team 2-1 up, all eyes were on experienced Saina to propel India to the final and the Hyderabadi responded in style by thrashing Jia 21-8, 21-15 in a 38-minute contest.

India will take on the winners of the second semifinal between England and Malaysia in the gold medal match on Monday.