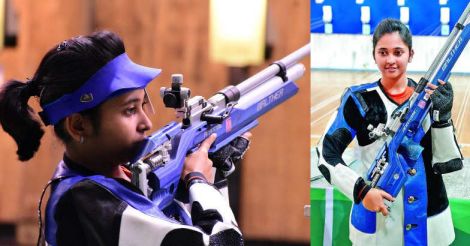 Mehuli Ghosh aggregated a record 247.2 but a 9.9 in the shoot-off put paid to her hopes of claiming the top prize, as Veloso shot 10.3. Photo: Twitter/India in Australia

Gold Coast: Young Mehuli Ghosh settled for the silver medal after forcing a shoot-off in the women's 10m air rifle event with a perfect final shot of 10.9 while Apurvi Chandela secured bronze in the Commonwealth Games here on Monday.

The 17-year Ghosh shot an excellent 10.9 to take the finals into a shoot-off with Singapore's Martina Lindsay Veloso, the eventual gold medallist with a games record score of 247.2.

Defending champions Chandela totalled 225.3 to finish third on the podium.

Chandela had earlier smashed her own Commonwealth Games qualifying record from four years back by scoring 423.2.

However, Ghosh, a bronze medallist in her maiden ISSF World Cup outing in Mexico last month, produced a better performance to topple her more experienced compatriot.

Trained by Olympian Joydeep Karmakar, Ghosh showed her fighting abilities all through but fell short by just .4 in the end.