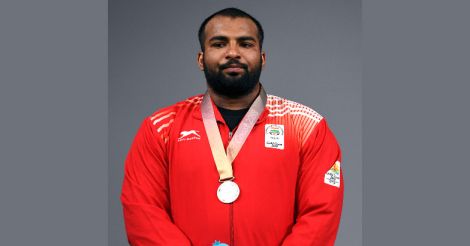 Pardeep Singh poses on the podium after winning the silver medal in the men's 105kg weightlifting final at the 2018 Gold Coast Commonwealth Games. AFP

Gold Coast: Indian weightlifter Pardeep Singh (105kg) came agonisingly close to a gold but eventually settled for a silver after a close contest with Samoa's Sanele Mao in the Commonwelth Games here on Monday.

Singh, the reigning Commonwealth Championships gold-medallist, lifted a total of 352kg (152kg+200kg) to claim the second spot after an exciting showdown with Mao, which had the packed arena on its feet.

The 23-year-old went for 211kg lift, which would have been a new Commonwealth and Games record in clean and jerk, but could not pull it off in his final attempt.

"I have lifted a personal best of 215kg in the past but may be it wasn't my day," said the Games debutant, who was happy with a podium finish but a shade disappointed with the colour of his medal.

"Whatever happens is god's wish. It was meant to be a silver for me, so I ended up with that," he added.

His second attempt at 209kg was declared invalid by the jury despite getting the judges' nod. The jury felt his elbow had pressed out, making it a no lift.

"I don't know why it was declared invalid. As I said, perhaps it was meant to be a silver for me. Whatever happens, happens for a reason," the hint of disappointment in his tone hard to miss.

Prodded a bit about his initiation into the sport, Singh revealed that he started lifting bars at the age of 13.

"If you ask me about motivation, there was none, I was just pushed into it by my family. Probably because my uncle was into it," he said.

Indian weightlifters have so far claimed five gold, two silver and an equal number of bronze medals in the competition so far.