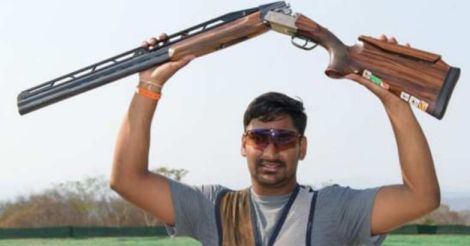 Brisbane: Ankur Mittal added to the Indian shooting contingent's medal rush by winning a bronze in the men's double trap event of the 21st Commonwealth Games here on Wednesday.

Mittal finished third on the podium after scoring 53 in the finals at the Belmont Shooting Centre.

Mohammed Asab, the other Indian shooter in the six-man finals, finished fourth, a climbdown from the bronze medal he won in Glasgow four years ago.

Scotland's David McMath claimed the gold medal with a Games record 74, while the silver went to Tim Kneale (70) of Isle of Man.

The experienced James Willett was the first to be eliminated.

The 26-year-old Mittal, who won silver medal in the World Championships in Moscow last year besides a silver and gold in the ISSF World Cups, rallied to finish fifth with 133 in the qualifying.

Mittal had to be contend with a fifth-place finish in the 2014 Games.

Asab shot 137 to get into a shoot-off with McMath in the qualification before finishing second.