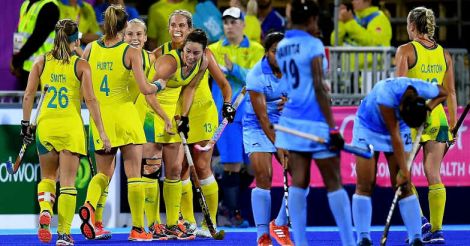 Gold Coast: Indian women's hockey team failed to capitalise on two goal-scoring chances in the dying minutes to suffer a 0-1 defeat at the hands of triple defending champions Australia in the semifinals of the Commonwealth Games here on Thursday.

Desperate to neutralise Grace Stewart's strike in the third quarter, India's coach Harendra Singh recalled goalkeeper Savita Punia when only four minutes were left in the match but his players could not cash in on the chances that came their way.

Navneet Kaur missed out on a sitter from a Monika Malik cross from the right flank while captain Rani Rampal could not slam in a through pass from Vandana Kataria.

India will now clash with England for a bronze medal on Saturday.

The play was mostly restricted to India's half with Australia dominating the contest with high ball possession.

The Indian team saved two back-to-back penalty corners in the early minutes of first quarter after Vandana created a move inside the Australian striking circle. Her move, however, lacked support to pose a serious threat.

The Indian defence remained solid to keep an aggressive Australia at bay, though, passing upfront was not fluent for the Rani-led team.

The hosts kept attacking the Indian half and Grace Stewart missed a shot in front of the Indian goal but the Indians came out of the first quarter unscathed.

Indian custodian Savita deflected a furious hit from an Australian player early into the second quarter. A yellow card to Navneet meant that the Indian team was down to 10 women for five minutes.

The defending champions remained offensive, restricting the play to India's half but still could not penetrate the opposition defence as the second quarter too remained goal-less.

Australia earned their third penalty corner of the match in the third quarter but an onrushing Deep Grace Ekka foiled the attempt. Stewart broke the deadlock by tapping a high cross, straight into the Indian goal.

India earned back-to-back penalty corners in the fourth quarter but squandered both as the opportunity to score an equaliser went a begging. They got another PC but could not utilise that also.