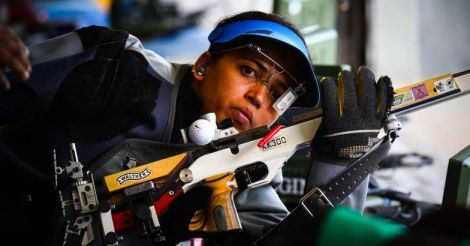 Gold Coast: The seasoned Tejaswini Sawant brought her years of experience into play en route to claiming the silver medal in the women's 50m rifle prone event of the 21st Commonwealth Games here on Thursday.

Young Anjum Moudgil, the other Indian shooter in the fray, finished a lowly 16th with 602.2.

Singapore's rifle ace Martina Lindsay Veloso won the gold medal with a Games record 621, while Seonaid Mcintosh of Scotland bagged the bronze with 618.1 at the Belmont Shooting centre here.

The 37-year-old former world champion was placed second after four series even as Moudgil faced elimination. She maintained her position at the end of the fifth series and ensured another medal for India with a final-series score of 104.6, her best effort of the day.

On achieving her sixth medal at her third Commonwealth Games, she said, "It is very nice. I'm very, very happy."

About the weather conditions, Tejaswini said, "It was a little windy today, but not too tough."

When asked about her future competition plans, the shooter said, "I'm aiming for the Olympic Games in Tokyo (2020), but next I will go to the Asian Games (in Jakarta in August, 2018), and then the World Championships in South Korea (August-September, 2018)."

A gold medallist at the 2006 Commonwealth Games in 10m air rifle singles and pairs with Avneet Kaur Sidhu events, Tejaswini is also the first Indian to clinch a gold in World Championship in 2010.

When Delhi hosted the Commonwealth Games eight years ago, the Kohlapur-born shooter won silver in 50 rifle prone singles and bronze in 50 m rifle prone pairs along with Meena Kumari.

In the same Games, she also bagged silver in 50 m rifle 3 positions event along with Lajjakumari Goswami.

However, Anjum Moudgil seemed ill at ease on the day, not long after winning the 50m rifle 3 positions silver in the ISSF World Cup in Guadalajara, Mexico, last month when she shot 399/400 in prone in qualifications.