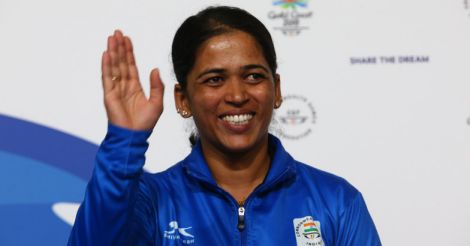 India's Tejaswini Sawant waves during the medal ceremony for the women's 50m rifle prone shooting final during the 2018 Gold Coast Commonwealth Games at the Belmont Shooting Complex in Brisbane on April 12, 2018. AFP

Tejaswini held the lead from the first shot in the finals and broke the CWG record with 457.9.

The 37-year-old scored 152.4 in kneeling and 157.1 in prone positions before the eight finalists entered the elimination stage.

The previous record of 449.1 was set by Jasmine Ser Xiang Wei of Singapore at the Glasgow Games in 2014.

Moudgil, 24, had led the qualification with a Games record herself and carried the form into the final where she shot 455.7, holding the second position with scores of 151.9 in kneeling and 157.1 in prone.

This was an improvement on the silver Tejaswini won in the 50m rifle prone yesterday.

This is the seventh CWG medal for Tejaswini, following two golds in 2006, a pair of silvers and a bronze in 2010 and a silver in women's 50m rifle prone in the ongoing edition.

The Indians were consistency personified as, after 10 shots in the elimination stage, Tejaswini and Anjum led the standings with 417.4 and 416.3 points respectively.

They sustained the form throughout to grab the top two positions in the day's first finals at the Belmont Shooting Centre.

For Arjuna awardee Tejaswini, who in 2010 became the first Indian to win gold at the Shooting World Championship, her two podium finishes in successive days here will somewhat make up for the disappointing showing at the 2016 Rio Olympics.

On the other hand, the 24-year-old Moudgil has tasted her first success in these Games while making her maiden appearance. The Chandigarh-based shooter entered the Games on the back of a silver-winning performance at the ISSF World Cup in Guadalajara, Mexico last month.

While Sawant again brought all her years of experience into play in the finals, Moudgil showed resilience while making fine recovery after finishing a disappointing 16 in 50m rifle prone.

In the qualification, Moudgil had shattered the CWG Qualifying record by a significant margin. Her 589 (196 in kneeling, 199 in prone and 194 in standing) ensures she finished at the top in qualifying.

Asked how she plans to celebrate, she said, "I finished everything today so yes, there will definitely be celebrations."