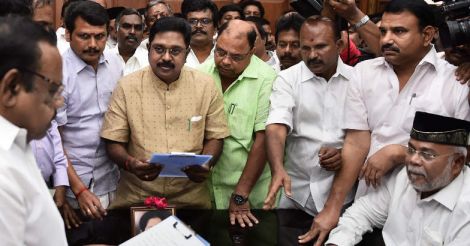 TTV Dhinakaran being sworn-in as a member of Tamil Nadu assembly at the Secretariat, in Chennai, on Friday. PTI

Chennai: Sidelined AIADMK leader T T V Dhinakaran was sworn-in as a member of the Tamil Nadu assembly days after he won the by-election to the RK Nagar constituency represented by late chief minister Jayalalithaa.

The newly elected MLA was sworn-in as a member of the 15th Assembly by speaker P Dhanapal in his office here after the former arrived there to a rousing reception by his supporters who lined-up all along the route from his residence.

The supporters threw flower petals at the vehicle of Dhinakaran even as they raised slogans hailing "TTV annan" (elder brother) and his recent win.

Some of them also presented him shawls and bouquets as he halted his vehicle at several places along the arterial Kamarajar road off the famous Marina Beach leading to Fort St George, housing the assembly and the state secretariat.

Standing in the vehicle through the sun-roof for sometime, the newly elected MLA waved to his supporters and also showed the victory sign of thumbs up.

After the swearing-in, Dhanapal shook hands with Dhinakaran, who has been sidelined by the ruling camp of the AIADMK along with his aunt and jailed leader Sasikala.

The sidelined leader later claimed that the Palaniswami government will not last beyond "three to four months".

The ruling camp brushed aside his claim with deputy chief minister O Panneerselvam saying he can't be replying to "those who are in dreamland."

A battery of Dhinakaran's supporters, including key aides and disqualified MLAs P Vetrivel and Thangatamilselvan, were present at the swearing in.

Aranthangi MLA E A Rathinasabapathy was also present. He had joined the Dhinakaran camp after 18 AIADMK legislators loyal to the sidelined leader were disqualified in September.

Contesting the December 21 by-poll as an independent, Dhinakaran defeated AIADMK's E Madhusudhanan by a thumping margin of 40,707 votes, dealing a blow to the ruling camp headed by chief minister K Palaniswami.

The by-poll was held to fill the vacancy caused by death of then sitting member Jayalalithaa on December 5 last year.

The ruling camp has attributed Dhinakaran's victory to a "tacit understanding" between him and principal opposition DMK, whose candidate N Maruthu Ganesh finished a poor third and lost deposit in the by-poll.

Dhinakaran, who has vowed to oust the Palainiswami government for betraying Sasikala, will make his legislature debut next month when the assembly meets on January 8 for its first session of 2018 with the customary Governor's address.

Dhinakaran is a former MP, having represented AIADMK in both houses of Parliament between 1999 and 2010.

He was made party deputy general secretary by Sasikala ahead of going to the Bengaluru prison after the Supreme Court convicted her in a corruption case in February last.

Speaking to reporters after taking oath as MLA, Dhinakaran urged the top "5-6" persons in the ruling camp to "step away as an atonement of your mistakes" and allow continuation of "Amma (Jayalalithaa) rule."

The RK Nagar verdict has shown "we are the true AIADMK, working under the aegis of Chinnamma and in the lines of Amma and Puratchi Thalaivar MGR (party founder, the late MG Ramachandran)," he said.

Sasikala, serving a four year jail term in Bengaluru in the Rs 66.65 crore disproportionate assets case, is addressed as 'Chinnamma' by her supporters.

Dhinakaran has been accusing the rival camp of "betrayal," in an apparent reference to the revolt against Sasikala by Panneerselvam and Palaniswami patching up with him later.

Palaniswami was handpicked by Sasikala to lead the state after she was convicted in the assets case.

"Be it the chief minister or deputy chief minister or four others (senior ministers)---their conscience knows how Chinnamma or TTV had helped them on different occasions. They (rival camp leaders) have come to a dead end. If they don't change they will vanish from politics," he claimed.

Without naming any Minister, he said people would make them change if they did not do so on their own.

He said the ruling dispensation should ponder over the by-poll verdict and a "self-assessment" would reveal "betrayal has been given a reply," by the voters.

He also claimed many on the ruling side "are with us mentally though not physically... Many have started coming towards us."

Expressing hope of a favorable court verdict on the pleas against disqualification of 18 MLAs, he said that in such a scenario the Palaniswami government could face a trust vote. "During voting our sleeper cells will do their job," he said.

He has been claiming his "sleeper cells" were embedded in the ruling camp and would be 'activated' at appropriate time.

Dhinakaran also chided the ruling camp for expelling his supporters in the wake of the RK Nagar bypoll defeat, saying "people are laughing at these expulsions."

Earlier in the day, Panneerselvam and Palaniswami cracked the whip on 132 pro-Dhinakaran functionaries in AIADMK, expelling them from the party for bringing "disrepute" to it.

They had yesterday sacked 44 persons, besides five others on Monday. Key Dhinakaran aides including Vetrivel and Thangatamilselvan had been removed as party district secretaries.