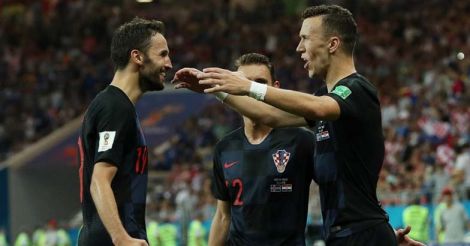 Perisic, with Luka Modric the only player not rested, struck in the last minute to confirm their last-16 clash with Denmark after Milan Badelj's second-half goal had been cancelled out by Gylfi Sigurdsson's penalty.

Iceland, who had a handful of good chances, finish bottom of the group with one point but high in their thunder-clapping fans' esteem. Argentina took second place and will face France after beating Nigeria 2-1, a result that sent the third-placed African team packing.

With qualification assured, coach Zlatko Dalic fielded the youngest Croatia team at a World Cup, making nine changes from the team who beat Argentina 3-0, and even if they struggled at times, his players were clinical.

As expected, Croatia bossed the midfield and Iceland were perfectly happy with the scenario, looking to hit their opponents on the break.

The Iceland fans started the night's first 'Thunder Clap' in support of midfielder Birkir Bjarnason, who briefly left the pitch with a bloodied nose after clashing with Marko Pjaca's elbow.

Croatia's possession was sterile but, with a draw enough to top the group, they had little incentive, especially as Iceland were pretty toothless until news of Lionel Messi's opening goal reached them.

They started to press higher, putting Croatia on the backfoot.

Five minutes before the break, Alfred Finnbogason played a one-two with Sigurdsson but his first-time shot from just inside the box went wide.

On the stroke of halftime, Aron Gunnarsson fired an angled shot that was bound for the top corner until Lovre Kalinic tipped it away.

Croatia had their first clear chance when Milan Badelj's missile crashed onto the bar six minutes into the second half.

The midfielder was more accurate two minutes later as he thundered a volley into the back of the net to open the scoring.

Iceland faced a huge task as Nigeria almost simultaneously equalised against Argentina, but they reacted swiftly.

Sverrir Ingason forced Kalinic to another spectacular save, seconds before his header shaved the top of the bar.

Iceland were rewarded in the 76th minute when second-half substitute Dejan Lovren handled the ball and Sigurdsson rifled the resulting penalty into the roof of the net.

Iceland's hopes were up again, but Perisic's cool finish after he slipped into the left side of the area made sure there would be no fairy tale to tell for the Icelanders.