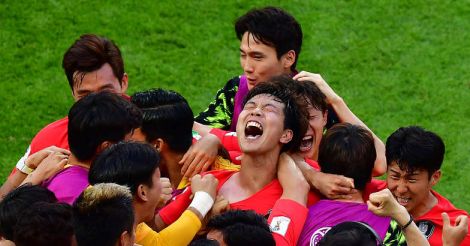 Kazan: Champions Germany were sent crashing out of the World Cup after suffering a stunning 2-0 defeat by a tenacious South Korea on Wednesday that saw them eliminated in the first round for the first time in 80 years.

Germany would have progressed with a win at the Kazan Arena but barely looked capable of scoring against the Koreans, let alone going on to successfully defend the title they won in Brazil four years ago.

Stoppage-time goals from Kim Young-gwon and Son Heung-min finished off Joachim Loew's sorry Germany side, who finished bottom of the group on three points. 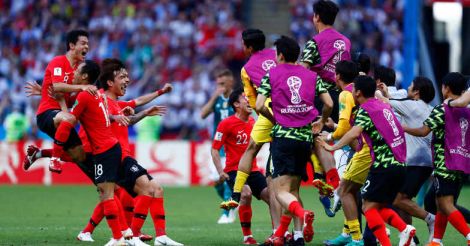 South Korea's players celebrate their goal against Germany at the Kazan Arena in Kazan on June 27, 2018. AFP

They have won four World Cup titles and also finished runners-up four times and entered this year's tournament heavily backed to retain their title. Instead they will head home after a stunning failure, having been unable to break down the South Koreans and after a shock 1-0 loss to Mexico in their opening group match.

Sweden won the group after thrashing the Mexicans 3-0.

Germany's Toni Kroos, the free-kick hero in the 2-1 win over Sweden, tried desperately to spark his side into action in the second half but was denied by South Korea's heroic Cho Hyun-woo in the 88th minute, one of a number of fine saves by the keeper.

But it was Kim Young-gwon who broke the deadlock in added time when he found himself alone in front of goal after a corner and he poked the ball home from close range.

Moments later Son sprinted to retrieve a long ball, with Germany keeper Neuer having left his goal to try to help his side get a goal, and the Korean striker fired a low shot into the net to wrap up the win and leave the Germans distraught.