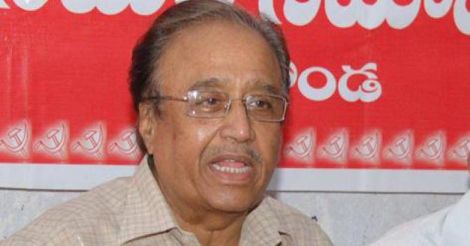 Hyderabad: The CPI general secretary Suravaram Sudhakar Reddy on Monday said that Meira Kumar would give a "tough fight" in the presidential elections, and the opposition parties would try to reach out to NDA allies to back their joint candidate.

"It's not a symbolic fight, it will be a good, tough fight," the general secretary of Communist Party of India said.

Of the 10,98,903 votes of the electoral college, "We have already talked to 3.5 lakh to four lakh votes. Political parties' mandate (they cannot issue whip) will not be available. Let's see, what will happen," he said.

"Some of the NDA allies may also vote for us. It will be a tough fight," Reddy said, adding, the opposition parties would "certainly" try to reach out to NDA allies to support Meira Kumar.

"State (Bihar) politics might have created such a problem, and we have no idea exactly what's the reason for this sudden right-about-turn. Anyway, it's an unfortunate type of development for opposition parties," Reddy said.

With over 62 percent of the votes firmly behind him, Kovind's election as the next president is almost certain. Besides the BJP and its NDA allies, the TRS, the YSRCP, the AIADMK, the BJD and the JD(U) have also announced their support to him.

The presidential election is scheduled for July 17 and the counting of votes will take place on July 20.

Kovind filed his nomination in the presence of prime minister Narendra Modi in New Delhi on June 23.

If elected, Kovind will be the second Dalit president after K.R. Narayanan.