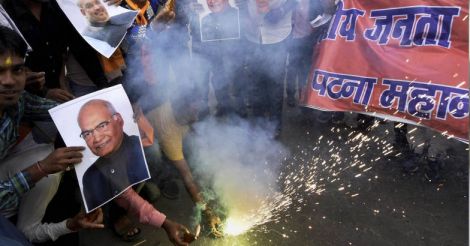 Kanpur: A festive atmosphere prevailed outside the residence of Ram Nath Kovind in Maharishi Dayanand Vihar colony of Kalyanpur here with people exchanging sweets and embracing each other as the results of the presidential poll were declared.

Kovind, the NDA candidate, defeated opposition's Meira Kumar in the contest for the top constitutional position, a victory that for the residents of the colony, symbolized the arrival of the festival season.

"It gives us immense pleasure and pride that Kovindji, who has been chosen as the country's 14th President, is a resident of ward number 20 of Kanpur Municipal Corporation, which I have the privilege of representing," Sanjay Batham, the local corporator said.

For us, it is Diwali, Holi and Dussehra today, he said.

"Even before the counting had begun, we had started celebrations. The day Kovind's name was announced, we were confident of his victory," he said.

Even the officers of the Kanpur Municipal Corporation sounded ecstatic over Kovind's victory.

Neighbors started flocking Kovind's house here as early as 7 am.

Sarita, a resident of Kalyanpur, said, "We have a strong bond with Kovindji's family, and he has always motivated us to move ahead in life."

As soon as the results were formally announced, crackers were burst in Kalyanpur.

The teachers of DAV College, where Kovind had studied, said they were proud of his achievement.

"It is indeed a glorious moment, as one of the proud alumnus of our college is now going to occupy the top constitutional post of the country. Former prime minister Atal Bihari Vajpayee has been an illustrious alumnus of the DAV College," said Amit Kumar Srivastava, principal of the college.

People in Paraunkh village of Derapur sub-division of Kanpur Dehat were the perhaps the happiest lot, as one of the humblest people among them had won the race to the Raisina Hill.

Even before the results were declared, people offered prayers and performed yagnas and havans seeking victory for Kovind. Special prayers were held at the Paroaka temple in the village, where Kovind used to worship regularly till he resided in the village. Villagers said that Kovind offered prayers at the temple whenever he came there for a short stay.

Some people said they felt that before taking the charge as the president of India, Kovind will first come to Mikteshwar Ashram in Fattepur seeking the blessings of his guru.

One of Kovind's classmate, Vijay Pal, who studied with him till class fifth said that "since early childhood days, Kovind enjoyed playing the role of governor in various games."

Showering praises on Kovind, Ashok Trivedi, a villager said, "He is very generous and has worked for the betterment of the people of the village with his funds."