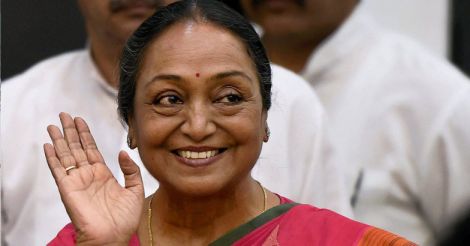 New Delhi: Opposition presidential candidate Meira Kumar Wednesday filed her nomination in the presence of top Congress and opposition leaders and said it marked the beginning of her "fight for ideology".

Kumar, 72, who filed her papers with Congress chief Sonia Gandhi and former prime minister Manmohan Singh by her side, will launch her campaign from Sabarmati Ashram in Gujarat on June 30.

Accompanying the former Lok Sabha speaker as she filed her nomination in Parliament House were a host of opposition leaders, including NCP's Sharad Pawar and CPI-M general secretary Sitaram Yechury.

Sonia Gandhi and other top Congress and other opposition leaders were among those who proposed and seconded her nomination.

"I have filed my nomination papers as the opposition candidate for the presidential election. Along with Sonia Gandhi, leaders of 16 opposition parties were also present as were members of the electoral college.

"From today, our fight of ideology has started. This ideology is based on democratic values, inclusiveness in society, freedom of the press and individuals, end of poverty, transparency and destruction of caste structure," she said after filing her papers.

She also said she doesn't merely believe in talking about about this ideology, but in implementing it.

Kumar said she had already appealed to all members of the electoral college that this was a very important time when the country stood at a crossroads.

"There is one path which takes us towards narrow- mindedness and no concern for the poor and downtrodden, while the other path leads to upliftment of dalits, poor, oppressed, downtrodden, women and labor and people of all religions.

"I have urged everyone to hear the voice of their inner conscience and take the country forward."

She said she would reach Sabarmati, from where she draws strength and inspiration, Thursday evening itself and would start her campaign the next day. From there, she would go to Mumbai and Bangalore and be in Bihar on July 6.

She ends her campaign on July 15.

The nomination papers will be scrutinized Thursday.

Kumar, who will contest against NDA's Ram Nath Kovind in the July 17 presidential elections, had said Tuesday that it was a battle of ideologies and not a 'dalit versus dalit' fight as was being made out by some.