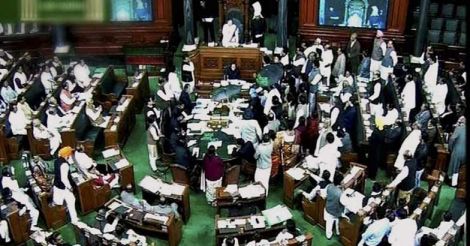 New Delhi: Legislators of Parliament and state assemblies cannot use their pens and will have to mark their preferences in the Presidential poll on Monday with a specially-designed writing instrument.

Voting by using any other pen will be held invalid, the election commission said on Sunday.

The violet ink pen, procured from Mysore Paints that supplies indelible ink to mark voters' fingers, carries a unique serial number and will be handed over to the voter before they enter the voting chambers in Parliament and state assemblies.

The move -- a first by the election commission -- comes in the wake of a row that erupted in the Rajya Sabha polls in Haryana last year.

Read: The rich electorate that picks the Indian president

Votes of 12 MLAs from the Congress and its allies were declared invalid in September 2016 because they had marked their preferences with a pen other than the one officially supplied by the poll staff.

Stage set for presidential polls | All you need to know

The tenure of the incumbent, Pranab Mukherjee,...

The specially designed pens are being supplied "so as to ensure that only the instrument supplied by the EC is used for marking the ballot", a statement from the poll panel said.

"Before entering (a) voting chamber, one polling staff will collect personal pens, if anyone is possessing, and will give (the) special pen to MPs and MLAs for marking ballot," the statement said.

The special pen will have to be returned to the polling staff.

"Voting by using any other pen may lead to invalidation of the vote at the time of counting," the statement said.

The poll panel has also prepared special posters for dos and don'ts so as to "ensure peaceful poll". The instructions include maintenance of secrecy and non-issuance of whip.

A total 32 polling stations -- one in Parliament House Room No 62 and rest one each in state legislative assemblies -- have been set for the election that has NDA's Ram Nath Kovind pitted against opposition candidate Meira Kumar.

Ballot papers will be available in two colors - green for use of MPs and pink for MLAs.

A total of 776 MPs and 4,120 MLAs are eligible to vote on Monday. The ballot boxes will be brought to Delhi for counting on July 20.

The Election Commission has appointed 33 observers to conduct the election. Two observers will be in Parliament and one each in 31 legislative assemblies.

Forty-one Lok Sabha members including Uttar Pradesh chief minister Yogi Adityanath have been allowed to vote in their state assemblies.

Similarly, the panel has permitted five MLAs to exercise their vote in Parliament and four other MLAs to vote in other state legislative assemblies.